It has been one month since the deadliest mass shooting in the United States occurred. Mass shootings are historically common on college campuses, so questions are raised as to how Youngstown State University keep students safe in the event of an active shooter situation.

Chief of Police for YSU Shawn Varso said a rough estimate of how long it would take officers to respond to an active shooter situation on campus is one to two minutes. 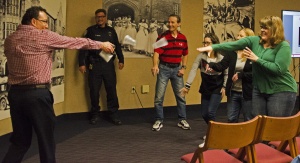 “We have sufficient coverage during all of our shifts, 24 [hours] a day that there is no part on campus that couldn’t [have] at least one officer … respond to within minutes.” said Varso

YSU police officers are taught several different tactics and have been to a wide range of trainings, along with using various buildings throughout campus to practice exercises for active shooter scenarios, Varso said.

“When an active shooter or a call of an active shooter comes in, our officers will immediately be responding to the area,” he said. “As they are immediately responding to the area, they are going to directly go to the threat and try to stop the threat as quickly as possible. While that’s happening, we are going to be calling for assistance from other police departments.”

Varso said Penguin Alert is the main way for students to stay notified about situations on campus. Students are automatically signed up for email alerts upon becoming a student, but it is up to students if they sign up for text alerts.

Upon last information available, Varso said only about 30 to 40 percent of students, faculty and staff signed up to receive text alerts.

He said along with the PenguinAlert system, there are other means of communication with campus for those who do not check email frequently or are not signed up for text alerts.

“We have what’s called a simplex mass communication system,” Varso said. “At any time we can interfere with all the fire alarm speakers in the buildings and there are also speakers outside of certain buildings placed strategically around campus.”

The best way for students and faculty to stay safe is to follow the ALICE program, which is offered on campus, he said.

“Generally there are three things that you should think of in a situation,” Varso said. “If you’ve never had the ALICE program or you’ve had it or you can’t remember all the aspects of it, it’s a simplistic way of saying run, hide, fight.”

He said the training is effective because it gives people options.

According to Suhanya Aravamudhan, training and development coordinator, said ALICE training is offered roughly every other month. Students, faculty and staff are able to participate and the training is free.

Rosalyn Donaldson, manager of training development, said the purpose of ALICE training is to offer methods to stay safe if an active shooter scenario was to occur.

Mark Baranski, a faculty member at YSU, was amongst the faculty and students who attended the most recent ALICE training. He said the training is important to individuals on campus.

“I wanted to find out more information of what the instructor is supposed to do during any kind of active shooter scenario,” Baranski said.

Jenna Latcheran, a YSU student who participated, said the training will also benefit her future career.

“I am in [college] for school psychology and I feel like it’s important that I do get some extra training in this since I will be in a school,” Latcheran said. “I think it’s good to have for this day and age.”

YSU police officer Terry Round taught the most recent ALICE course. Round said it is essential for students and faculty to know what do with a weapon if they are able to disarm the gunman.

“We don’t want you to touch that weapon. What we would like you to do is get that weapon into a trashcan; we don’t want anybody carrying around a weapon or putting a weapon in their pocket, taking it away and running away with it from the shooter,” Round said.

According to Varso, there has never been an active shooter on YSU’s campus and there has only been one threat.