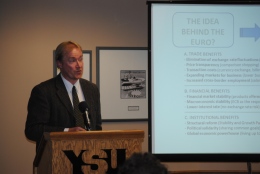 Tomi Ovaska, associate professor of economics, explains the economic benefits and consequences experienced by the 17 European nations that use the euro as their currency. Ovaska and two other professors provided a three-pronged approach to the crisis at a forum in the Presidential Suites of Kilcawley Center on Tuesday. Photo by Jordan D. Uhl/The Jambar.

To inform the campus community, Youngstown State University faculty members held a forum on the eurozone debt crisis on Tuesday.

Lepak cited an impact on trade that could damper job prospects and weaken the U.S. economy as students prepare to enter the workforce.

More than 50 students attended, though some were compelled to do so by their instructors.

Others, like senior Sean Knaub, attended out of their own interest.

He said his curiosity in foreign affairs drew him there.

“It was definitely informative,” Knaub said. “Especially to someone who might not understand the current economic crisis.”

Each professor offered an analysis of the problem through the lens of his respective field of study.

Lepak said he fears too many Americans don’t take it seriously.

Lepak, who planned the event, provided insight from a political standpoint.

Europe’s elected leaders have been changing rapidly by way of angry voters, whose ballots symbolize a modern-day guillotine.

To put the animosity in perspective, Ovaska said that if he were to call his father, who still resides in Finland, and bring up the issue, despite the language barrier, “you’d still get the gist of his argument.”

“People are mad,” Ovaska said. “That is very obvious in [European Union] discussion.”

The anger is fueled by a democratic deficit, meaning many leaders aren’t elected, but rather appointed. These executives then make unpopular, and debatably necessary, decisions on behalf of their constituents, yet the people have no mechanism to remove them from power.

It all began with peace, Simonelli said.

He gave a brief history lesson on the European unification efforts and how a peaceful continent was a desired result. Political and economic factors played a part, but with a long history of feuding states in close proximity to one another, tranquility was priority number one.

Smaller economic and governmental unions coalesced throughout the second half of the 20th century, but it was the Maastricht Treaty, signed in 1992, that established the European Union.

To bring the countries even closer, they sought a monetary union as well.

In 1999, the euro was first introduced as a form of credit. The actual currency was implemented in 2002. Seventeen European countries now accept the euro as their official currency.

The benefits, Ovaska said, are great.

It brought more financial innovation and trade benefits, leveled the playing field for smaller markets and kept other countries accountable when dealing with their neighbors.

Greece has proven incapable of managing the responsibilities.

Uncontrolled government spending has resulted in the worst public debt to gross domestic product ratio in the continent.

Similar domestic interest rates on U.S. Treasury bonds would require 80 percent of all federal spending to pay off just the interest, Ovaska said.

“Although there are several states which could adversely tip the eurozone scale, Greece’s irresponsible and failing economic policies make it the most likely candidate,” Knaub said.

This has left European leaders scrambling to find an amicable resolution.

Bailout funds and stability mechanisms injecting trillions of euros into weak economies have yet to solve the problem, but Ovaska remains optimistic.

“Forgoing its benefits is just too costly,” Ovaska said.

There are two schools of thought. First, they could drastically cut spending and increase taxes, a process which is commonly referred to as an austerity measure. Or, as the weaker countries prefer, interest on their debt could be cut, and other countries and financial institutions can come to the rescue with a stimulus or more bailout packages.

None of the panelists proposed a solution; however, Lepak and Ovaska said upcoming political and financial sector action would play a role in decision-making.

As a political science major, Knaub wasn’t surprised by the lack of progress in assuaging European financial instability that panelists say will undoubtedly affect America.

“For me, it simply drove home what I have understood for quite some time now,” Knaub said.