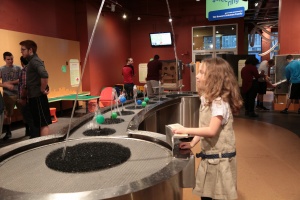 On Nov. 5, children visited the center to test the exhibits and learn from about 50 students showcasing their designs.

Jason Zapka, an instructor in the department of electrical and computer engineering, said the project provides students with practical experience early on in their studies.

“You want to give them something hands-on so they can learn a little, have a lot of fun and gain a little bit of knowledge and apply it with some of the stuff they’re learning in the classroom,” Zapka said.

Angelo LaMarca, facilities director at OH WOW!, said YSU students are involved in several of their events throughout the year.

“This evening is particularly cool because it gives kids a chance to interact with older people that aren’t their parents [or teachers],” LaMarca said. “We love doing this, it’s one of the highlights of our year and it’s a great collaboration.”

One of the biggest hits was a project called “Why does the airplane fly?” It consisted of a box with PVC piping snaked through the inside and sticking out of the top. Valves near the bottom of the box were turned, and an air pump in the box directed air through the pipes causing Ping-Pong balls sitting on top of the pipes to levitate.

Another project involved helping children create origami boats to test them on the water to see which shapes have more buoyancy.

Lauren Jones, one of the students working on the project, said it’s an idea that kids can grasp easily.

Other projects the students created included a pinball-style setup where kids had to pull back a knob with enough force to sink it in a hole near the top, and a game where kids used a spoon to catapult a Ping-Pong ball into holes that were cut out of a piece of cardboard.

Zapka said the center keeps some of the exhibits and uses them for special events.

His class also teams up with the Creekside Golf Dome in Girard to design mini golf holes, which the owners sometimes incorporate into their actual courses. The top designs from this year’s event will be on display at Moser Hall on Nov. 17 and 19.

He said outings like these improve not only a student’s grasp on engineering concepts, but also their ability to work as a team.

“It allows them to work with this multi-disciplinary team. Some of them have different passions, different areas that they are interested in but they have to learn, they have to come together and come up with these projects and kind of use everyone’s concepts,” Zapka said. “That’s what they’re going to have to do when they get out to the workplace.”

“They work directly with the facilities department and they do everything from helping us work on new exhibits, to learning how to troubleshoot all the exhibits in here, to helping us fix them,” LaMarca said.

Zapka looks forward to having his students showcase their designs in the spring, when local schools will take their kids on a field trip to see what YSU students can come up with.

“I think it’s a really great opportunity, working both with OH WOW! and some of the other things we do with that engineering program. They’re interacting with the community,” Zapka said. “I would love to see us have the ability to do more, but there’s only so much you can do. You have to keep the students in the classroom as well.”

LaMarca said the goal is for the students to inspire the next generation of engineers.