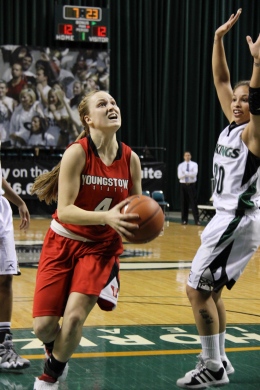 The Youngstown State University basketball teams concluded their seasons after being eliminated in the early portion of the Horizon League tournament.

The men’s team began its tournament at Beeghly Center on Feb. 28, defeating the University of Wisconsin-Green Bay 77-60.

It traveled to Valparaiso University and faced the University of Detroit Mercy on Friday, falling 93-76.

The Penguins trailed by 16 at halftime  and fought their way back in the early part of the second half. They trailed by 10 at one point, but were unable to break the threshold.

“By the time we could play, it just got out of control,” said junior forward Damian Eargle after the game. “We just didn’t want to embarrass our fans and our organization. We just gave it our all.”

“They had a tremendous year in terms of effort — in terms of caring for each other,” Slocum said. “That’s as close of a group that I’ve been around in a long, long, long time. I enjoyed being with them.”

“I’m very proud of this group in terms of what they accomplished,” Slocum said. “Getting 10 wins in the Horizon League is something that they can kind of hang their hat on.”

“We did so much this year,” Eargle said. “If it wasn’t for them, we would probably not be in the position that we are right now.”

As for the women, they lost at Cleveland State University on Monday, 59-56, in the first round of the HL tournament.

After the game, head coach Bob Boldon said it was a bittersweet ending.

The Penguins finished the season 10-20 overall and 4-14 in the HL. They had the same HL record last season, but four more wins overall. The team is two years removed from a 0-30 overall record.

“Things went pretty well overall this season,” said senior guard Kenya Middlebrooks. “I’m proud to be on the team, I’m proud to have [Boldon] as my coach for two years.”

Middlebrooks was one of three seniors on the team alongside Macey Nortey and Tieara Jones.

“I think they were good examples to our younger kids, and I thought they handled change incredibly well,” Boldon said.

Boldon added that Middlebrooks’ transition from her junior to senior year has been remarkable.

“It’s something that we will continue to use,” he said. “She doesn’t know this, but it’s something we’ll be able to use for recruiting for years to come. Ken’s ability to get to the rim this year was fantastic.”

One player Boldon is

excited to see return next year is Brown, even though he

said she finished the season

on a bad note.

“Brandi’s done so much for us since I got here, and I think it got to her,” Boldon said. “I think as the season wore down she just started to get fatigued. She’ll never tell you that. For the last two weeks, she’s been a little bit less explosive than she’s been all year.”