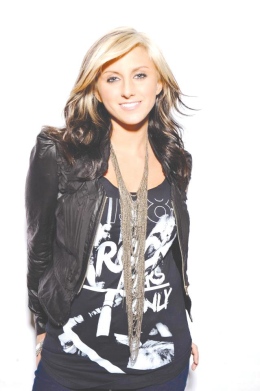 That’s how far she travels twice a month to pursue her dream of becoming a country music star.

But she’ll never forget where she came from.

“I wrote a song about Youngstown because, to me, there’s nothing better than home,” Sarah Turner said. “I have the best memories from my hometown, and I’m proud of where I come from.”

The 2010 Boardman High School graduate began singing in plays and church choirs when she was around 6 years old. She continued during high school, playing a lead role in her high school’s production of “Peter Pan.”

Her mother, Mary Ann Turner, said her daughter would sing for her late grandfather each time they visited him.

“Her grandpa was always her biggest fan,” she said.

After attending Kent State University and a semester at YSU, Sarah Turner put college on hold to pursue her singing career.

“She is building her confidence and is determined to see this through no matter how long it takes,” Mary Ann Turner said.

The singer-songwriter began her career by recording five cover songs for a demo. She made her EP while traveling back and forth to Nashville, where she practices with her band.

Her single, “Youngstown,” was released in December.

Sarah Turner is not yet signed with a record label, but she remains confident. She has performed at local events like the Canfield Fair and sang the national anthem for the Youngstown Phantoms, Mahoning Valley Scrappers and Cleveland Indians, as well as at YSU home football games.

Opening with a 30-minute set for Trace Adkins on Friday at the Covelli Centre marks her biggest performance yet.

“When I heard that Trace Adkins’ people loved my music, I couldn’t pick my mouth up off the floor,” Turner said. “I really don’t ever get nervous. I’m always just excited.”

Turner is most proud of the song she wrote for Ray “Boom Boom” Mancini, another Youngstown native.

The song, “Fight for You,” will be used in Mancini’s upcoming HBO documentary.

Though her career blossoms, Sarah Turner idolizes the country music stars she grew up listening to.

Her mother said Sarah has loved country music for as long as she can remember.

“I am obsessed with Kenny Chesney,” Sarah Turner said. “I would have dreams that I was on his tour bus, singing with him.”

“Hopefully in five years, I’ll be on stage somewhere on tour,” she said. “Wherever God wants me to be. … He has a plan.”

Sarah Turner remains humbled by the support of her family, friends and fans.

“I have a wonderful family who is very supportive of my dreams,” she said. “Having close family and friends to support you means the world.”

She also keeps a close relationship with her producer Joe Beck; manager George Saadi, a Youngstown native who works in Los Angeles; and her Nashville band.

“I love my Nashville Band,” Turner said. “By the way, they are a wonderful group of guys — fun and so supportive.”

“I have invested a lot of time into my career,” Sarah Turner said. “I love reaching out to people, setting goals for myself and working hard to pursue the things I love.”

Mary Ann Turner said this has been Sarah’s dream for a long time.

“We’ll continue to support her as long as she has a joy for this,” she said.