The Shamrock Crawl, an early celebration of St. Patrick’s Day, moved through the downtown bars and through the frigid weather on March 9.

The event kicked off at Suzie’s Dogs and Drafts where green beer was flowing and the charitable aspect of the event was taking place.

The bar crawl journeyed to 10 bars including O’Donold’s, The Federal, Draught House and the Whistle & Keg.

The Director of Operations for both O’Donold’s and Suzie’s, Christian Rinehart, said the event has been held the last five years and is always a week before St. Patrick’s Day. Every year, Rinehart said the goal is the same — raise money for charity and have a good time.

The $5 admittance fee for this year’s bar crawl was donated to the Rescue Mission. Rinehart said  the charitable goal every year is around $1,000 to $1,500.

To attract a crowd for business and donations, each bar had specials on drinks and O’Donold’s and Suzie’s had live music. The band at O’Donold’s, the Shaffer Brothers, specialized in Irish music.

Aundrea Cika was in charge of sign-up and donations for the bar crawl. She said there was also a raffle giving away a Chevy Cruze. She said last year’s event was their most successful, and her expectations for this year’s was just as high.

What Cika thinks draws people to the event is the group aspect of the crawl, going bar-to-bar with friends and meeting new people. She also said people like the shirts they receive for participating. 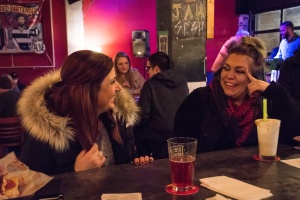 Attendee, Erika Goddard, said she heard about the event from Facebook and thought it would be something enjoyable she and her friend could do while also giving to the less fortunate.

“It helps the city, the local bars, along with the Rescue Mission,” Goddard said.

For folks like Goddard, the St. Patrick’s Day season may be a well needed break from the winter blues.

Rinehart said he notices a change during March as people get tired of constantly being indoors. St. Patrick’s Day and the festivities throughout the month can give people an early spring feeling.

Rinehart, who also runs an Irish bar, enjoys St. Patrick’s Day festivities as well. He said any reason to have a good party for the Irish is something worth looking forward to.

Rinehart said the attractiveness of the bar crawl comes from the opportunity to see more of downtown.

“People can go and see all the places downtown and especially the new places like the Whistle & Keg,” Rinehart said. “It showcases how downtown is changing and I think students and people who work down here know that, but suburbans might not.”