Youngstown State University’s 15-day enrollment numbers have declined for the fifth straight year, but they appear to be on a path to improvement.

“Even though we’re still down, the reality is that I am delighted because we have really stemmed the tide, or stopped the bleeding. We’ve stabilized the enrollment.” Swegan said.

Current enrollment stands at 12,471 students, 85 fewer than the 12,556 that were enrolled last year. This represents a 0.7 percent decrease. Over the last four years, the decline in enrollment has averaged 4.7 percent, peaking at 6.2 percent last year.

Because of the four-year decline in enrollment, when registration opened last spring, 1,069 fewer students were eligible to reregister than the year before.

“If everything else had stayed the same, if we had brought in the same size freshman class, if we’d retained students at the same rate, we would have been down as an institution about 8.5 percent,” Swegan said. “We didn’t close all of the gap, but we closed all but 85 students.”

On the enrollment side of things, the university brought in over 600 more students than they did last year. The freshman class is 247 students larger than it was last year. There are six more transfer students, 45 more incoming graduate students and just over 300 new college credit plus students.

There was also a significant increase in the freshman-to-sophomore retention rate. Last year the rate was 67 percent, this year it rose to 73.2 percent.

“In all my years of higher education, I’ve never been at a place where the freshman-to-sophomore retention improved in one year by six percentage points. I mean, that’s just off the charts,” Swegan said. 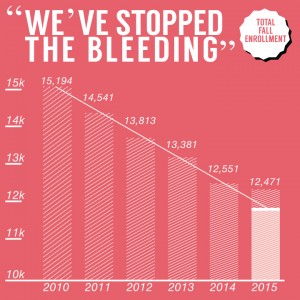 Swegan said YSU’s freshman-to-sophomore retention rate has been between 65 and 68 percent over the last five years, and it had never varied more than a percentage point and a half. In his previous job, at Bowling Green State University, it never moved by more than three percentage points, and even that was unusual.

He attributed part of the increase in retention to last year’s freshman class being the strongest academically at that time.

“That class last year was our first class since we have gone to selective admission,” Swegan said. “That retention rate going up six percent is at least partially explained by the fact that we had better students coming in the front door.”

“It was the best class that we’ve ever brought in,” Swegan said. “So we would certainly expect that our retention rate would continue to remain high, or higher than it has historically been.”

When the university was budgeting for this fiscal year, they had projected a one percent increase in enrollment, but Swegan said they realized that this was optimistic.

“We knew internally that we would be able to absorb as much as a one percent decline,” Swegan said. “As long as we were somewhere within that range that we would feel that we were in pretty decent shape.”

Swegan said things are coming together in a positive way.

“I feel very confident that we’ve now built an infrastructure that is sustainable,” Swegan said. “I fully believe we will have just as much success this coming year, maybe a even a little bit more.”

While noting the difficulty of forecasting, Swegan said while numbers should increase, we might not return to a university with 15,000 students.

“When we were at 15,000, this was also a different place. It was an open admission institution,” Swegan said.

He said the state funding formula also changed over the last five years, and we have to focus on bringing in students who can be successful.

“Starting next fall, we’ll start to see the enrollment going in the right direction, and we might settle in somewhere between where we are right now and where the high enrollment was back in 2010, but as we settle in … those students would have a much greater chance for success,” Swegan said.