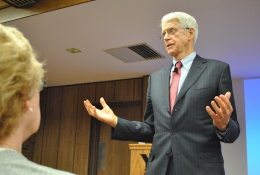 Dr. Caldwell B. Esselstyn lectured Wednesday on the health benefits of a plant-based diet in the Ohio Room of Kilcawley Center. Photo by Chris Cotelesse/The Jambar.

World-renowned doctor and researcher Dr. Caldwell B. Esselstyn Jr. spoke to a packed Ohio Room on Wednesday evening, lecturing on heart disease prevention and healthy dieting habits that, as he has attempted to prove through research, reverse heart disease, atherosclerosis and other cardiovascular conditions.

“The truth be known that the leading killer of men and women in western society is nothing more than a toothless paper tiger. It doesn’t need to exist,” Esselstyn said.

A former general surgeon at the Cleveland Clinic, Esselstyn noticed, through extensive research, that vegan dieting and abstaining from oils, fructose, nuts and avocado can bring dramatic and noticeable health benefits.

“All [problems] we can dominate with plant-based nutrition,” he said.

As of 2010, one in three American adults were overweight. Ohioans were slightly under the national average — but not by much at 30.9 percent. Adults in Mahoning County were at 28.1 percent.

Esselstyn’s message meets opposition and skepticism in a society that spends more than $100 billion each year on fast food.

“Some argue that this diet is extreme and radical, but, as Dr. Esselstyn says, so is open heart surgery where a chest is sawed in half and split open,” said Dorian Monroe, a junior food and nutrition major pursing registered dietitian certification.

Monroe was part of a group — consisting of Youngstown State University students, leaders, local organizations and businesses — that was “passionate about vegetarianism and health” and worked to bring Esselstyn to campus.

As a member of the Food and Nutrition Students group and the Youngstown State Environmental and Animal Rights Coalition, Monroe sought funding from the Student Government Association to cover Esselstyn’s $500 speaking fee. After his request was granted, the planning was underway.

Shortly after his appearance was announced to the public, reservations ran out.

“I’m delighted for the invitation, that Dorian and others would want me to be here,” Esselstyn said.

Esselstyn’s visit coincides with a thriving time for healthy living on campus.

On Jan. 31, the Ohio Department of Health will award YSU, along with 33 others, a bronze-level Healthy Worksite Award.

“Positive returns on investment are realized in employees who improve their health, resulting in decreased rates of absenteeism and increased productivity. Employers also realize reductions in health care costs and an overall increase in productivity and job satisfaction,” Laura Ritzler, chairwoman of the Healthy Ohio Business Council, said in an issued statement.

While Clyde is proud of what YSU has accomplished since instituting the campus wellness program three years ago, she realizes there’s still more work to be done.

The applicants for the awards are subject to judging in different criteria from leadership support to athletic equipment offerings. However, Clyde admitted one area in which she was sure YSU was docked points was the healthy food offerings.

“There’s not a lot of opportunities for good meals,” she said.

The lack of healthy vegetarian and vegan friendly dining options is one of the most significant problems that YSEARC is coping with.

“[We have] very limited options,” Monroe said. “Everything is processed.

Even the stuff that you think is food for you, [like] Fiber 1 bars, is loaded with sugar, oil and processed ingredients.”

Monroe, and others who abstain from consuming meat and animal products, find it hard to abide by their dietary choices while on campus.

“Even when they do offer vegan and vegetarian options, they are very limited and it’s definitely not sufficient for someone who is a vegan or vegetarian 24/7,” Monroe said.

Clyde, while not a vegetarian or vegan, recognizes the difficulties they face.

As YSU’s food services are subject to different vendors, patrons are “kind of a captive audience.”

“We can’t control and fine-tune [their menus],” Clyde said.

Vegan pizza, burgers, sandwiches and stir-fry were added to menus throughout establishments in Kilcawley.

John Young, director of Kilcawley Center, said the switch was because of limited hours at Pete’s Place.

Aside from encouraging campus employees to seek healthy lifestyles, Clyde works to educate them on truly healthy food selections.

Barcodes have been added to posters in the food court to allow smartphone users to quickly access the caloric intake of each restaurant’s menu offerings.