DJ Davis, junior theater studies major at Youngstown State University, is one of five students whose scripts have been chosen to be performed in a 10-minute play put on by Bliss Hall on April 27 and 28.

His 10-minute play, titled “Game Night!” is the story of a group of friends, each with different sets of values and beliefs. The play shows how they put those disparities aside.

Davis said he wrote “Game Night!” because he feels that we live in a society where everyone is calling people out on the things that they believe.

“People are always talking about their opinions and they are always making other people mad, but what we don’t see a lot of is tolerance of other ideas and cultures,” he said.

Davis said his view on the lack of tolerance among society for people with different viewpoints and his personal connections with friends and family inspired the idea.

“People can have different beliefs and still be friends,” he said.

Dubos said the play holds an important and relevant message that she thinks everyone needs to hear.

“DJ is one of the most driven people I know,” she said. “It is really inspiring to see how passionate he is with everything he does.”

Davis, who is from Pataskala, Ohio, said he first got involved in acting at the age of seven, when his mom put him in a local performance of “A Christmas Carol.”

He said he continued to do shows in high school, and created a YouTube channel that generated a lot of positive feedback from his peers.

Davis said he felt it was rewarding that people enjoyed his performances, which is what drove him to pursue a degree in theater studies. 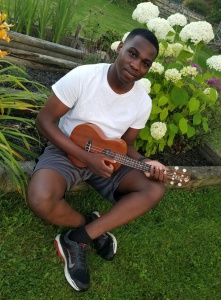 Davis said he planned to go to Columbia College Chicago, but chose YSU based on the affordable tuition and his family’s influence as alumni of the university.

“There’s so much theater here and ways to grow,” he said. “Now that I think about it, I’m actually happy that I came here instead of Chicago because it gave me a chance to grow up.”

Chris Hill, assistant professor in the department of theater and dance, said he has had “the great joy” of seeing Davis grow for the last two years.

“I’ve had him in acting classes, theater history classes, and I’ve worked with him in production several times. Like many theater students, DJ came to us with a great deal of talent, but it’s been a particular treat to watch him harness and refine that talent,” he said.

Hill said Davis “has something” that cannot be taught.

“[He has] a willingness to work tirelessly to get what he wants — this, in addition to what he’s learned at YSU, will take him very far, indeed. He’s smart, thoughtful, analytical and ambitious — great qualities in a theater artist,” Hill said.

Davis is currently directing a one act show titled “Tone Clusters,” based off the murder of a 13- year-old girl who was killed by her neighbor. He also has a professional contract for “Trumpet” in New Philadelphia this summer and will be performing in “Trumpet in the Land” and “Bye Bye Birdie.”