Youngstown State University held the Diversity Leadership Recognition Dinner to honor the continuous efforts and achievements of student and faculty leaders who dedicate their time to promoting diversity and creating an inclusive environment on March 22.

Sylvia J. Imler, associate vice president of Multicultural Affairs, said this year’s theme was focused on creating a culture of community within YSU and the surrounding area.

Catherine Cooper, YSU graduate student in the department of counseling, school psychology and educational leadership, was presented with the Leader of Tomorrow award at the event. She said winning the award came as a complete shock to her.

“I know that I’m making a powerful impact in regard to the diversity and inclusion on Youngstown State University’s campus,” she said. “I do what any other students would do if they had to promote diversity inclusion.”

This is the first time she received an award in recognition of her efforts to promote diversity and inclusion in her academic career.

Cooper said she felt appreciative of her instructors, friends and family. 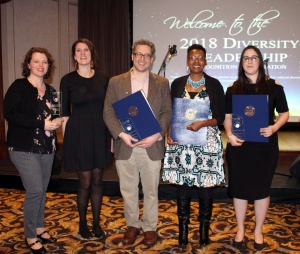 “I feel like this is a shared victory,” she said. “I wouldn’t be here where I am right now … It means a lot to me.”

Cooper said students need to step out of their comfort zones in order to learn about different cultures, religions and aspects of what diversity means.

She is biracial and a first-generation college student. Cooper said she looks to represent minority students on campus and provide a perspective that acknowledges the multifaceted nature of society.

“I want them to feel that they can have the support system … in order to become successful regardless of where they are from,” she said.

Cooper said she plans to continue her work to represent women, minority groups and international students in the future.

Michael Jerryson, associate professor in the Department of Philosophy and Religious Studies, received an award for campus leadership.

“It’s important to see how far we have to go, but also how much we have accomplished,” he said.

“Coming from an underrepresented population and being a first generation college student, I’ve had people who inspired me and worked hard to helped me advance, so it’s my give-back,” she said.

Additionally, the Diversity Leadership Achievement Award was given to the Office of Assessments (OOA) staff.

Hillary Fuhrman, director of assessment at OOA, said the group is normally behind the scenes working with data, so people don’t typically see what they have accomplished.

“It’s nice to know that the data has been used to improve campus,” she said.

Natalie Nguyen, a freshman and Cochran Scholar from Hanoi, Vietnam, and Emilie Eberth performed at the event with a violin and piano accompaniment.

YSU President Jim Tressel presented recipients with their awards at the dinner.