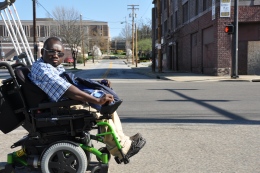 Senior Isaac Adu-Poku uses an electric wheelchair and crutches to get around campus. Adu-Poku has been a part of disability services for three years. Photo by Doug Livingston/The Jambar.

Either Isaac Adu-Poku’s father or his friends drop him off on campus every morning. He stabilizes himself with his crutches or unfolds his wheelchair as he enters Youngtown State University’s disability services.

Adu-Poku has been utilizing the services for nearly three years due to a physical handicap.

“I have problems with my legs, and so I’m not very mobile, so I use crutches, and I use my wheelchair all the time,” Adu-Poku said.

But getting around campus and to disability services’ offices can be strenuous.

Since its establishment, disability services at YSU has relocated three times. The latest transfer brought the services closer to campus, making it more accessible than before.

The service has moved multiple times in attempts to find an accessible building for students, causing each location to be temporary, said Gina McGranahan, assistant director of disability services.

The previous locations were on Wick Avenue in the Wick House dormitory and on Wood Street near the newly constructed Williamson Hall.

McGranahan said the Wick Avenue and Wood Street locations did not have good parking options and were not wheelchair or restroom accessible.

The new single-story building, on Fifth Avenue has windows in the test rooms and cameras that allow the staff to supervise a student who is testing without providing distractions.

It is directly across from the Beeghly College of Education, and McGranahan said that anonymity and accessibility are two of the most improved attributes.

“We’re not inside the library or something where people can see them, so if they don’t want other people to know that they have a disability, they don’t have to,” McGranahan said.

The new location is Adu-Poku’s favorite of the three. He said the staff calls him part of the team because he is there every week.

When Adu-Poku started at YSU in the summer of 2009, he said his classes were scattered throughout campus, making it hard for him to travel to the disability services office when he needed to.

Adu-Poku, a freshman accounting major, said the commute to disability services is more convenient because he is stationed in Williamson Hall four days a week.

Even then, he said he runs into some problems.

“When the weather is nice, it’s cool. Right now I like to go out and sit in the chair with people around,” he said. “But I find that it’s awful, especially in the winter. Sometimes my wheelchair will get stuck, and I need someone to push me.”

Disability services employs student workers to escort those like Adu-Poku who are in need of escorting or assistance.

He said he often used the help during his freshman and sophomore years, but wanted to be more independent once he became familiar with the campus.

Adu-Poku doesn’t consider the distance between the office and campus an issue, especially if people have a ride to and from school like he does.

McGranahan said students are unaware of facilities, such as a shuttle service, that are available to them to make their commute to the building easier.

There are also two large parking lots in the front and back of the building for students able to drive themselves.

Freshman criminal justice major Rebekah Theobald receives audio books and lecture recordings from her classes. She also has a reader on test days because of a reading-comprehension learning disability.

She said it would be helpful for the service to move closer to the campus core, but the walk isn’t a big issue if someone needs the accommodations.

“Half of my stress is because of tests, and it’s alleviated by this center. I’m very happy they have this, not just for me, but for everybody,” Theobald said. “You can normally tell who needs help, and you can tell them there’s this place right down the road.”

Theobald said she seldom goes to the office, and when she does, it’s only when there is a problem with scheduling or testing in her classes.

The service had made the forms and information easily accessible on the Internet. Once students are registered, they will be enrolled with the services until they choose to terminate their application.

McGranahan said, last semester, 707 students registered for the services, and each year it fluctuates between 650 to 750. Not all students are active, but each is able to use the services as needed.

“A lot of people say, ‘Oh, well, I don’t have a physical disability,’” McGranahan said. “If you have a learning disability, if you have diabetes, if you have anything covered under the Americans with Disabilities Act, then we can help you.”