From harsh noise shows to mellow groove sessions, the Wickyards on Wick Avenue offers a laid-back look into the underground music scene.

When passing by, 711 Wick Avenue doesn’t look like much more than any other old mansion, but the Tudor-style architecture bearing a beaten sign for the McVean, Hughes and McClurkin funeral home houses a secret: it’s home to an underground music venue.

When entering the French doors, guests can merely glance to the left at a wall detailing a long history. Posters line the wall from performances dating back to the original Boardman location, which first opened in November 2011. The posters are often designed by performing bands and friends of owner and operator Erik Engartner, and they serve as a snapshot to the diversity of performances.

“This isn’t really your typical venue in any way, shape or form,” Engartner said. “For anyone looking to come, expect the unexpected.”

Over its nearly 10-year history, the Wickyards has provided a variety of artists from all genres a chance to perform for a small crowd without fear of “getting robbed or rained out,” which are risks when performing home, garage or outdoor shows.

Jake Brandenstein, the bassist for the band We, the Creature, has played at the Wickyards several times.

“The best way we could describe the Wickyards is ‘dank’ and ‘cursed,’ but there’s a mystique to it,” he said. “There’s something that truly pulls you in.”

The venue got its start in 2011, when 16-year-old Engartner and his father began cleaning up and repairing an old warehouse in Boardman.

“My friends and I in high school really had nowhere to play — we couldn’t get into bars, we couldn’t do anything like that,” Engartner said.

The business has never sold alcohol, allowing musicians of all ages a space to express themselves.

“We have some of the most chill vibes you can possibly imagine,” Engartner said. 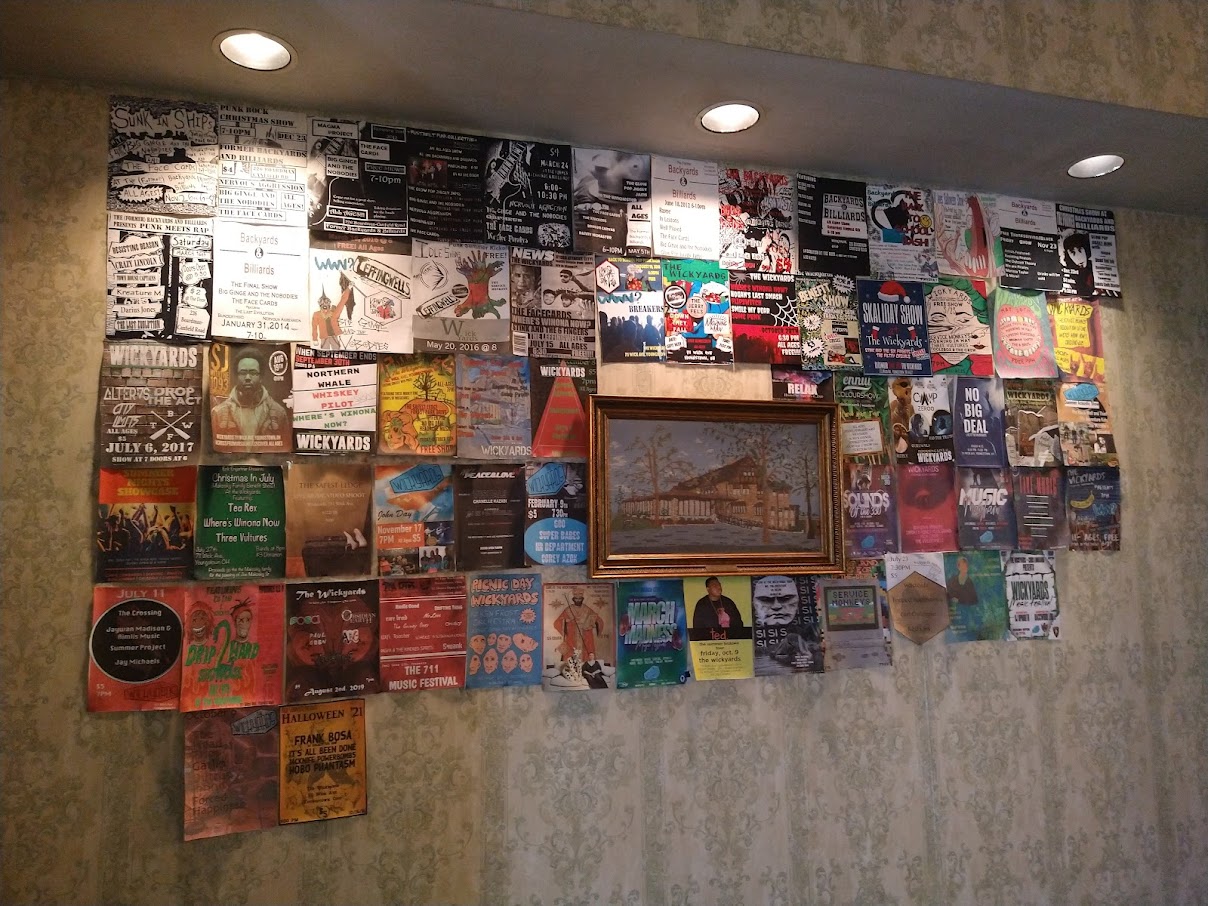 Singer, songwriter and guitarist Steven Wittkugle, who goes by Drifting Thing when performing, has been playing through Engartner’s business since the days of the Backyards and Billiards.

“I’m more than happy to play at Erik’s venues,” he said. “He’s outstanding and always takes care of the place. The shows never get crazy or out of hand.”

When Backyards and Billiards closed in January 2014, the venue moved from place to place before finally settling at its current Wick Avenue spot in 2016. Since then, the focus has been on providing an open environment for musical performances and experimentation.

The mansion, which was built in the early 1900s, remains almost entirely in its original state, when it was owned by the area’s notable Tod family. After shows, Engartner offers tours of the three-story building, detailing the structure’s many uses and its owners over the years.

“Going on the tour, going to the embalming room, going through the upstairs — it’s fantastic,” Brandenstein said.

“I’m a carpenter by day,” Wittkugle said. “When I look at the detail of the trim and the woodwork, it blows me away. The place is immaculate.”

As for the future of the Wickyards, Engartner has a few things in mind, including an anniversary celebration in November that is “going to be big.”

“We hope in October of 2022 we’re going to be able to open a haunted house here,” he said. “Until then, we’ve significantly increased our show output and how much we’ve been doing.”

For more information about upcoming shows or previous performances, check out the Wickyards on Instagram or Facebook.