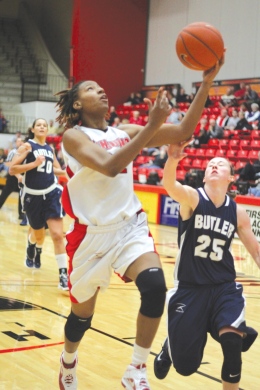 Senior Tieara Jones attempts a layup over Butler University on Feb. 4. Jones is one of three seniors who will be honored at Beeghly Center on Saturday. Photo by Dustin Livesay/The Jambar.

As the season winds down, questions remain as to where the Youngstown State University men’s and women’s basketball programs will be after Saturday.

Valpo ranks first in the Horizon League, while the Vikings rank second, the University of Detroit Mercy third, Butler fourth and YSU fifth, according to Horizon League standings.

YSU, Butler and Detroit have a 9-6 HL record, but head-to-head matchups break the tie, leaving YSU in fifth.

The Penguins lost to Butler twice. But Butler also lost to Detroit twice.

Even though YSU beat Detroit once, Detroit’s wins over Butler place the Titans higher than YSU and Butler in the HL standings.

The Penguins play Detroit again in their final game of the regular season on Feb. 25.

“It’s going to be fun come playoffs because anybody can get it, and I’ll say this now: Watch out for Butler,” Slocum said. “Here they go. They’re in their comfort zone.”

If all falls right for the Penguins, they have a chance to stand alone in third place after Saturday.

They begin with a road trip to the University of Wisconsin-Green Bay on Tuesday and conclude on Saturday in a non-conference, ESPN Sears BracketBusters matchup with Austin Peay State University.

“If you don’t bring your ‘A’ game in this league, you’re going to lose,” Slocum said. “I don’t care if you’re home or away.”

On the flipside, the women return home for the final time in the regular season. The Penguins square off with the University of Wisconsin-Milwaukee on Thursday and Green Bay on Saturday.

The women are on a three-game losing streak and have lost nine of their last 12 games. Head women’s basketball coach Bob Boldon said in Monday’s press conference that the energy level and morale is low.

“There’s a lot of frustration, a lot of disappointment, and it’s just something we’ve got to deal with to try and get ready before we play on Thursday,” Boldon said.

“You want to make sure you’re ready to go by Thursday,” Boldon said. “We pretty much had a miserable weekend, and that’s just something you’ve got to deal with.”

The Green Bay Phoenix will arrive in Youngstown on Saturday. They rank first in the HL and No. 9 in the nation.

Senior Kenya Middlebrooks said in the press conference that it would be nice to end her career at home with a win over an elite team.

“We haven’t beaten them yet since I’ve been here, so it would be pretty nice to get them,” Middlebrooks said. “They hustle a lot, they’re great on defense and they can shoot the basketball and put it in.”

Boldon said he wants to take advantage of the rare opportunity to defeat a top-25 team.

“It’s going to be our last this year against a ranked opponent, and those opportunities don’t come around a lot for mid-major schools,” Boldon said. “You want to make sure you’re ready [and] try to take advantage of it.”

“It’s nice to see these three young players grow as much as they have since I’ve been here,” Boldon said.

“Just to see those three develop in such a short period is refreshing.”

“A bunch of spirals everywhere, but I wouldn’t change it for anything,” Middlebrooks said. “We’ve been through the rough parts, and now we’re getting through the good parts.”

Middlebrooks added that this year is one of her finest. She is averaging 11.5 points per game and shooting 36.8 percent beyond the 3-point line.

“I wish it could’ve happened sooner, but what can you do?” she said.

The Penguins are tied for seventh place in the HL and are no longer eligible to win the regular season title. But they have a new goal: host a first-round game.

“We aren’t mathematically eliminated from hosting a game, and that’s something we’re interested in,” Boldon said.