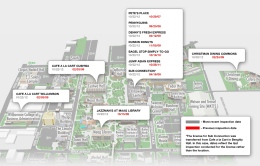 Until Oct. 22, the Youngstown City Health District neglected to inspect 11 on-campus dining locations for years at a time.

Participating restaurants on and off campus accept Pete’s Points vouchers, but the basic meal plans purchased by 1,016 students this academic year can be redeemed only at Sodexo’s 12 locations at YSU.

The city office failed to perform 44 inspections on campus locations between Oct. 22 and their previous dates.

Christman Dining Commons, the largest student destination, and nine others had missed inspections for three years.

Pete’s Place, the second largest, was last inspected in 2007. Only Jump Asian Express in Kilcawley Center had current reports.

The most recent inspections were conducted after The Jambar made multiple requests for records from the Youngstown City Health District’s Environmental Health Division, beginning Sept. 20 and encountering four weeks of delays.

The Youngstown City Health District requested addresses and then license numbers to assist its research.

The Jambar provided the information and followed up on the request with Environmental Health Director Cicero Davis.

On Oct. 19, Davis said inspections for campus restaurants were outdated, and that he would perform new ones after the weekend.

He faxed over seven fresh reports at the end of the business day on the following Monday and six more on the morning of Oct. 23. All campus locations passed their inspections, although a few had committed minor infractions.

Erin Bishop, acting health commissioner for the Youngstown City Health District, said before Davis was promoted to director in October 2010, he was the city inspector responsible for ensuring that YSU met state health standards.

In the meantime, Davis was supposed to survey these locations on a 15-month cycle before he renewed their licenses each year. The 12 campus restaurants that handle raw meat, milk or eggs require two inspections per cycle.

Even though Davis hadn’t performed necessary and state-mandated inspections, the Environmental Health Division received the applications and fees from each location and issued licenses.

During a standard inspection, city sanitarians check that personnel handle food with gloved hands and wear hairnets or baseball caps. They survey surfaces for safety and overall cleanliness, and they stick thermometers into steam tables and coolers to make sure their temperatures are either above 140 degrees Fahrenheit or below 40 degrees Fahrenheit.

Tina Hanes, a food safety specialist with the U.S. Department of Agriculture’s Meat and Poultry Hotline, said regular inspections are an important step in food safety.

“Regulations exist because foodborne illness is a more serious of a threat than people realize,” she said. “It kills people.”

The Centers for Disease Control and Prevention estimate “that each year roughly 1 in 6 Americans (or 48 million people) gets sick, 128,000 are hospitalized, and 3,000 die of foodborne diseases,” according to the CDC website.

Ed Krol, executive chef for YSU dining services, said he knew 11 of Sodexo’s 12 locations hadn’t been inspected for years, but he said he sees Davis often and wasn’t concerned about it.

“I think the local board of health has full confidence in us,” he said. “With the multi-levels and guidelines, I am completely comfortable with the food service.”

Krol said Sodexo hires an inspector from the National Sanitation Foundation, a privately funded independent inspection company, who comes once a year to inspect Sodexo locations on food and physical safety.

Ron Cole, director of university communications at YSU, said the precautions taken by Sodexo in its food services was a factor in deciding to contract with the food company.

“There should be no concern whatsoever regarding the safety of food and food preparation serving on campus,” Cole said.

“We check up on them, and we do surveys every three years,” Pollock said. On Sept. 24 and 25, state agents reviewed Davis’ paperwork. They shadowed city employees for on-site reviews.

Pollock said the department warned the local health district that it could be reorganized after the latest survey.

“We will support them to become compliant, but if there is a pattern of noncompliance, we look into giving that authority to either a neighboring facility or another health jurisdiction,” she said.

Pollock said the department will release the report on Tuesday, and the Environmental Health Division will have to submit a plan of correction.

Bishop said she believes her office will be able to comply with the state’s standards. “We have to go and do the inspections that were not done,” Bishop said.