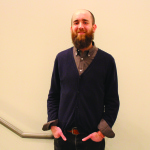 Multimedia artist Brian House spoke at the McDonough Museum on Feb 8 at 5 p.m.

Originally from Denver, House holds a degree in computer science from Columbia University and another in art from Chalmers University in Gothenburg, Sweden.

He was a member of the New York Times R&D Lab and was recognized in their “50 Best Inventions of 2011″ issue. His work has also been featured in WIRED, TIME, SPIN, Metropolis, Univision Sports, Slashdot, Creative Applications and Create Digital Music.

During his lecture on Monday, House discussed some of his work, which combines data, art and sound. One specific piece he mentioned was “Conversnitch,” a project he conducted in 2014 with New York media artist Kyle McDonald.

“Being an artist, you have to challenge the laws,” he said. “It is interesting to do and can be unethical, but worth it for the final product.”

He has been invited to multiple talks, made television and radio appearances and has been involved in multiple group and solo exhibitions in Los Angeles, New York and in Sweden.

McDonald and House placed small light bulb plugs into standard light fixtures in multiple public spots in New York. Via a microphone and Wi-Fi connection the audio was then streamed to Amazon’s Mechanical Turk, where it was then transcribed by anonymous workers and posted to the Twitter account @conversnitch.

Fox 5 News ran a story on the project. When it comes to consent for “Conversnitch,” House admits they may have violated laws.

When asked by an audience member how he makes money, House chuckled and described his work as voluntary.

“Most of my work is commission projects,” he said. “I create work for galleries and most of them provide funding.”

House gets his inspiration in response to particular opportunities or situations that come his way.

“Museum restrictions are productive,” he said. “I have to find a form to fit. Most of my ideas for projects, though, come out of conversations or personal interests.”

Ann Miller, a Warren resident interested in art, said she enjoyed the lecture greatly. She enjoyed hearing about House’s piece, which documents his daily bicycle commute from Brooklyn to midtown Manhattan in which he wore sensors for his heartrate, breathing and the cadence of his pedaling, along with chest-mounted video. Cellist Topu Lyo then interpreted the data via a composition derived from the sources.

“I’ve always been interested in performance artists and have just wondered why they do it,” she said. “I never see much around here about multimedia art. My favorite piece was ‘Forty-eight to Sixteen.’ His pieces spoke for themselves.”

From “Conversnitch,” recording data of his locations over a time span of a year, and recreating the path of a stolen phone through Google Street, House’s projects all incorporate data in art form.

“I love awkward translations where experience and representation don’t quite line up,” House said. “It says something about what happens in between.”

Annette Gottuso, an art studio major, said her favorite part of the lecture was hearing about his project “Arrangement for Building.”

“It was a very informative lecture on a subject I am not very familiar, which is media art mixed in with music,” she said. “It was important to be a part of. I really liked the museum piece, and I feel I would have loved to have been a part of it.”