Local underground music act, The Safest Ledge, recently released their single “Her Driveway,” from their upcoming EP “Double the Drifters, Half the Spirit,” which will be released Sept. 22.

Vocalist Kennedy Conti said, lyrically, the song was influenced by past complications he had with his ex-girlfriend. This song in particular revolves around his thoughts and feelings during that time.

“My ex and I used to have all our arguments in my car or her car always parked in her driveway,” Conti said. “This song is a journey through my thoughts around that time.”

As for the musical composition, guitarist Mason Boano said the band’s approach was to put less emphasis on their post hardcore sound and focus more on their hard rock abilities. 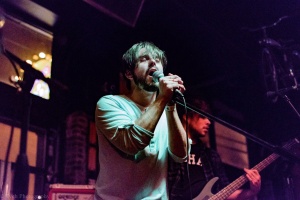 Bassist Mike Orf said hearing their new single is a great first taste for the upcoming EP, but the song does not define the rest of the recordings.

“‘Her Driveway’ isn’t identical to every other song,” Orf said. “The EP is pretty different with each song, almost giving off a different emotion with each track.”

Drummer Joey Koval agreed with Orf and said the single is the beginning of a story which the EP and the album tell.

“With this single opening up the album, it leaves a loud and resentful taste in your mouth,” Koval said. “As you continue through the album, it tells a full story while still carrying the edge of the first track.”

The Safest Ledge’s genre lies somewhere in the depths of alternative, rock and post hardcore, morphing into a sound in which Koval believes is new to the area.

“I really feel like we offer a new, refreshing sound that hasn’t really been noticed throughout the Youngstown scene,” Koval said

The refreshing sound Koval spoke of may be due to the band’s casual use of spoken word in their songs. This is an element Orf said really distinguishes them from other local bands.

Yet, for this new release, Boano said they eased up on the spoken word.

“The single shows how we wanted to put more of an emphasis on clean vocals,” Boano said. “We used screaming and spoken word more for effect this time around.”

Another change-up for the band was how they went about writing the songs, Boano said.

“We worked on everything with each other,” Boano said. “We were just writing as we went during practices and got everyone involved a little more.”

The band’s main goal when performing is not to please the ears of the listeners, but rather to create time for themselves to relieve stresses from their everyday lives.

“We really don’t write music for people to like,” Koval said. “It’s more of an emotional outlet that helps us feel more comfortable within our own lives and if people gravitate towards it, that’s killing two birds with one stone.”

Even though pleasing their fans is not the main goal, the gravitation of more people toward their music is something Orf does see as a goal.

“I look forward to people falling in love with our sound and our music having the ability to change lives,” Orf said.

The group’s next show will be Sept. 30 at a house party in Youngstown.