Dr. Amanda Fehlbaum, an assistant professor of sociology at Youngstown State University and an affiliated faculty member of the Women’s and Gender Studies program, attended the Women’s March on Washington in January, armed with a sign that caused people to stop her and ask for photographs. 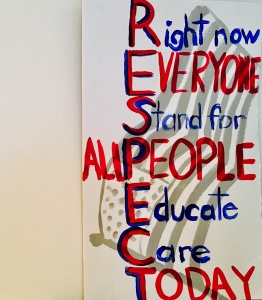 Signs like hers are what caused Nathan Felde, a design professor at Northeastern University, to gather a group of people together in order to save protest art seen at the historic event.

Fehlbaum is involved in content analysis for her research and says that it’s always interesting to look at the types of artifacts, like the signs used at the Women’s March and how they show the culture that was going on at the time.

“I definitely found it to be an empowering event and I would say life changing,” Fehlbaum said. “I think saving the signs that were used in the march would be beneficial because we like looking at art history.”

Ann Michelle McMaster, an adjunct instructor with the department of art and an art history teacher at YSU, said she supports saving the signs used in the march. McMaster and her daughter attended the march in Cleveland and ended up having a very positive experience.

McMaster thinks that if college students weren’t able to attend the march, then they would still have a secondary experience of knowing what it was like by viewing the signs.

“It’s nice to have the actual signs saved for sure,” McMaster said. “It’s a good way to record authentically what was actually carried instead of having word of mouth.”

RJ Thompson, an assistant professor of graphic and interactive design in the department of art at YSU, said he thinks that preserving the signs as art allows people in the future to observe the raw emotion of the signs — even if it’s just text on a poorly cut cardboard.

“The signs were clever, creative and were able to wrap up emotion, context intent and meaning within a few words,” Thompson said.

He believes these signs, graphics and images should be archived because it helps build a historical record that tells a true story of empowerment.

“There are just some amazing messages being put on the signs. Just incredible stuff,” Thompson said. “You don’t have to be an artist to make something look beautiful to get the point across.”