Things were in full Irish swing on Belmont Avenue at Kravitz Delicatessen Inc. on March 16 in Liberty. The County Mayo Irish Band (William D. Lewis, Ted Miller, Marcy Meiers, Bernie Bonnie and Brad Campbell) has been putting on a show for the community for over 35 years. 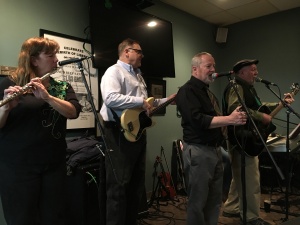 Lewis plays a variety of stringed instruments and whistles, Miller is the group’s lead singer and Meiers plays the flute and whistles. Bonnie plays bass guitar and Campbell, who is the newest member of the group, plays the keyboard.

Lewis, adjunct photojournalism professor at Youngstown State University, said that he and the rest of his fellow band members appreciate and enjoy playing music.

The founding group members had coincidentally met during a jam session taking place in Girard.

“Three of us met up there and thought that this was kind of fun,” Lewis said. “So a band came out of it and we’ve been at it for 35 years.”

The seasoned photojournalist for The Vindicator said that being a part of this band keeps him sane and that it is wonderful for his mental health. The musician also said that he enjoys sharing music with lots of people and seeing the positive impact.

Miller, fellow YSU alumnus, went to the jam session in Girard as well.

“The first time I’ve ever sang in front of people, I thought that people liked it because they just liked Irish music,” Miller said. “Then the musicians that were the pros at the time were treating me like I was something special and I thought that was nice.”

Miller went to YSU two times — the first was before he got drafted into the army and the second was when he got out. The current lead singer of the band ended up spending a total of six years at YSU.

Meiers, a 1987 graduate of YSU, got a scholarship to study in Ireland for six weeks and brought back the country’s influence when she returned to the states.

The flautist, pipes and whistle player said that being a part of this band is a lot of fun, gives her a lot of fun, late nights and is way less expensive than therapy.