Youngstown was bursting with energy on Aug. 11 when Florida Georgia Line performed at the Y Live Concert presented by JAC Live at Stambaugh Stadium.

Tyler Hubbard and Brian Kelley make up the country music duo. FGL is known for making music while frequently featuring a little flare from other music genres such as hip-hop and pop.

Their break-out hit “Cruise” shot to number one on the Billboard charts and eventually received the first ever Diamond certification for a country song.

Concertgoers tailgated for hours before the show, some even in business parking lots. Pe 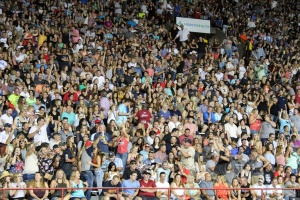 ople flooded 5th Avenue, causing heavy traffic congestion. On the upside, it was nice seeing the city so alive.

The Y Live event began with a performance by Chris Higbee followed by “Up Down” artist Morgan Wallen.

FGL took the stage at 9:15 p.m. to 20,000 people, breaking a Youngstown record for the largest gathering of people in the city.

The opening visuals and pyrotechnics grabbed the concertgoers’ attention as FGL kicked off the concert with “Anything Goes.”

They followed up by performing their less widely known songs such as “Colorado,” “Smooth” and “Confession,” before bringing back the energy with their new single “Simple.” 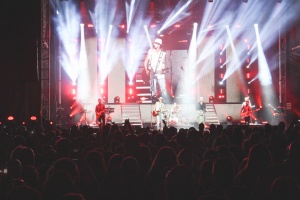 A major problem during the concert was the lighting which made it difficult to capture good quality photos for both photographers and concertgoers.

The background visuals also lacked creativity as they simply displaying the music video for the song they were singing at the moment.

Both Kelley and Hubbard had well-tuned vocals that intertwined seamlessly, but it was their energy onstage that seemed to be lacking. They aimlessly shuffled around onstage and it wasn’t until the second half of the concert that they utilized the remaining stage that expanded into the crowd in a “T” shape.

What saved the concert was the energy the fans brought by fully immersing themselves into the songs. Hits such as “Cruise,” “M 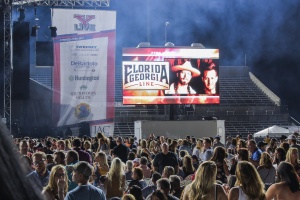 eant to Be,” “Holy” and “God, Your Mama and Me” sprang the crowd into a full-out sing off with fans busting out the lyrics word for word.

FGL created a unique and special moment by inviting their manager onstage to sing with them for the first time. They also brought opener Morgan Wallen back to perform his single “Up Down” which FGL happens to be featured on.

Despite the enormous turnout, FGL did not live up to expectations. A lack of energy, lazy visuals and poor lighting immensely impacted the duo’s performance.

The concert wasn’t the worst I’ve been to, but it also wasn’t the greatest. It will be interesting to see who JAC Live will bring to perform at Y Live next year.