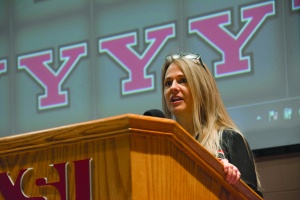 The Last Lecture is organized by SGA’s Academic Affairs committee.

“We have an open window of time for any SGA member to nominate a professor to lecture, and it’s that member’s responsibility to contact the professor,” Shriner-Briggs said. “Some years we have 30 nominations, and it’s not abnormal for professors to be too busy to talk.”

Cossentino said the central theme of her lecture will be overcoming obstacles by embracing challenges, and she will also touch on intellectual and emotional growth. She said she has a past with Last Lecture.

“Interestingly, in the fall of 2007, I was teaching the Intro to Honors Seminar and came across the YouTube video of the Last Lecture of Randy Pausch. I was moved by his lecture and believed it could benefit the students in my course,” Cossentino said.

This lecture by Randy Pausch is the original Last Lecture. Given at Carnegie Mellon University, Pausch’s lecture was delivered shortly after he was told his pancreatic cancer diagnosis was terminal.

“I asked my class to write their own eulogies and reflect upon their childhood dreams. I also wrote my own eulogy,” Cossentino said. “The assignment became an indirect exercise of goal setting and personal inspection.”

Ashley Orr, president of SGA, said she is excited to hear what Cossentino has to say because she’s touched so many lives on campus.

“She not only has had her honors students in class and her other students in seminars, but also in facilitating the honors program she’s had the opportunity to have her hand in a lot of students’ lives,” Orr said.

She said this occurs through direct contact with students, but also when she trains students in the Honors College who are all over campus.

“I think many students know about different volunteer programs that the honors program leads and a lot of those — the ideas and the vision for them — are inspired by Amy and her goals, her vision for the college,” Orr said.

Hu said he was grateful to be chosen as a finalist and thinks the series has the potential to build better relationships between professor and student.

“Sometimes the relationship between the students and the professors only stays at the classroom space, so some professors don’t seem to be as personal as they could be,” Hu said. “I think through this Last Lecture, it gives students a chance to bring everyone to the same level.”

Cossentino said she is honored and hopes students are able to take something from the lecture.

“As we age, we accumulate professional and life experiences with mistakes made and subsequent lessons learned,” Cossentino said. “Learning the hard way doesn’t have to be the norm. We gain insight through the stories of others. Having a Last Lecture series is a valuable forum for faculty to share their experiences and knowledge.”

Correction: The original version of this article stated Michael Jerryson was an assistant professor. He is an associate professor. The mistake has been corrected.