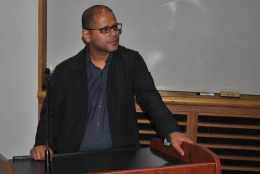 When interdisciplinary Hasan Elahi stepped off a plane in Detroit he was unaware that he was about to embark on the most adventurous art project of his career — one that would involve allegations of terrorism, government surveillance, watch lists and the Federal Bureau of Investigation.

Elahi told his story to a packed room at the McDonough Museum of Modern Art on Thursday evening.

In June 2002 Elahi was returning to his home in Florida from the Netherlands. He entered the country at the Detroit Metro Airport.

“I knew something was wrong as soon as I tried to go through customs. The agent scanned my passport and just froze. He stared at it so long that I finally asked him if anything was wrong,” Elahi said. “He just told me to follow him, and he took me to a holding area.”

Elahi was taken to a secure Immigration and Naturalization Services area and waited with other immigrants and refugees trying to enter the United States.

INS personnel questioned Elahi until an FBI agent took over the interrogation.

Fortunately, Elahi keeps meticulous records and calendars detailing his daily life. He was able to use his mobile planner to show the agent all the details of his schedule on any given day.

The agent eventually asked Elahi about the storage facility that he had rented space at in Tampa. The FBI believed he was hoarding explosives in the storage unit.

Elahi convinced INS and the FBI that he was not a danger and was able to board his connecting flight to Florida.

“The FBI agent told me that he had all my information, and they would be in touch with me through the Tampa office,” Elahi said.

So began six months of almost daily trips to the FBI field office to undergo questioning. Elahi was asked about every facet of his life and travels.

He was eventually cleared of any suspicion by passing nine concurrent polygraph tests, but not before his name found its way on to an official government watch list.

“They refused to give me anything that said I was officially cleared. They can’t clear you of any charges unless you’re officially charged, and I was never charged with anything,” Elahi said.

Elahi decided to be one step ahead.

“I took it upon myself to notify the FBI any time I was going anywhere or doing anything. My FBI agent’s name was Garry. If I was leaving to go anywhere, I’d email Garry with all my flight and contact information,” Elahi said.

What started with constant phone calls and emails to the FBI to notify them of his whereabouts soon struck him as having merit as a kind of performance art piece.

“I figured ‘once in the system, never out,'” Elahi said. “I decided to turn the tables and cooperate … with a vengeance.”

Over the course of the project he has generated tens of thousands of images of hotel rooms, airports, beds, receipts for purchases, meals and even toilets. He also carries a GPS device that constantly tracks his movements through the website’s live Google map.

“The best way to protect my privacy was to give it away,” Elahi said. “This project is my perpetual alibi. I thought ‘You want to watch me? Fine. But I can watch myself better than you can, and I can get a level of detail you will never have.'”

Elahi used his website to compile massive amounts of data about himself.

He saved communication records, bank statements, travel records, where he ate, where he slept, even pictures of every taco stand he at in Mexico City.

“The images seem empty and could be anywhere and connected to anyone, but they’re not. There are nearly fifty thousand images on my website detailing my travel to all the places I go,” Elahi said.

“I’m sure the FBI has seen the images. Agents know exactly where I’ve bought duck flavored paste, or kimchi. They know when I buy laundry detergent or potato chips because I’ve told them everything,” he said.

Despite the flood of personal information that Elahi has given away during this project he has been able to live a surprisingly anonymous and private life.

His images rarely show himself or other people. He says he is not comfortable with giving up someone else’s privacy just because he is so free with his own.

“If I cut out the middle man and flood the market with information then the intelligence the FBI has on me will be of no value,” Elahi said. “Making my private information public devalues the currency of the information that agencies have gathered.”

According to server records from Elahi’s website, the authorities have continued to keep track of him, but he hasn’t been bothered by them in person since opening his daily life up to them.