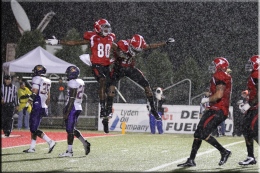 On the verge of what seems like a matchup bigger than any other so far this season for Youngstown State University, the Penguins — coaches and players alike — are sending a different vibe.

Given the task of traveling to Fargo, N.D., to play North Dakota State University, the reigning Football Championship Subdivision national champion and top-ranked team in the country, YSU is playing it cool.

“We’re just going into it like it’s a regular game,” defensive tackle Aronde Stanton said during Tuesday’s press conference. “We can’t play into the media and how they’re trying to hype the game up.”

Whether you believe their message or not, the No. 3-ranked Penguins will try to prove just how smooth they really are at 2:07 p.m. on Saturday inside the Fargodome.

“It’s a great game,” said running back Jamaine Cook. “But we’re taking it like any other game we play in our conference.”

In a battle of two 4-0 Missouri Valley Football Conference teams, YSU will try to recapture the result of its 2011 game at NDSU, which was a 27-24 victory.

“It’s a little bit different mindset than it was last year,” quarterback Kurt Hess said. “Last year, we kind of had our backs against the wall going in there. We were about .500, trying to make the playoffs. This year, it’s the same story for [NDSU] … but we’re kind of at the same level this year.”

That Bison loss to the Penguins proved to be their only defeat en route to a 14-1 championship season. So, naturally, YSU expects to see an NDSU team seeking revenge.

“I think that’s in the back of their minds,” Hess said. “They understand, probably, the heartbreak that they felt at home in front of their fans. We went into their house and did that, and they’re definitely going to remember that.”

NDSU expects to have a sell-out crowd on hand for the matchup. In fact, all Bison home games for the 2012 season have already sold out.

“It’s a great environment, and we’re looking forward to playing in it again,” Stanton said. The senior captain added that the fans aren’t too pleasant in Fargo.

“The fans are right there in your ear behind the bench,” Stanton said. “You try to play it off like you don’t hear them during the game, but after the game, we talk about it and say what they were saying to us.”

And what do those fans say?

“Not things I can say on the mic,” Stanton said, laughing.

What head football coach Eric Wolford did say on the microphone was his appreciation for NDSU junior quarterback Brock Jensen.

Through the first four games, Jensen has passed for 841 yards, resulting in eight touchdowns.

He’s also yet to throw an interception and has completed 70.4 percent of his passes.

“I think he’s better than he was last year, and he does a great job of managing football games,” Wolford said. “They do a great job of getting him in situations where he can be successful, and he has a great supporting cast.”

While the Penguins realize that they face a great challenge in the Bison, they aren’t lacking confidence just days before what Cook calls his “favorite road trip.”

“We’re confident we’re going to go up there and get another win,” Cook said.