Men of the Youngstown community are uniting together to encourage, cheer and welcome back high school students on their first day of class. East High School and Chaney High School will begin classes on Sept. 5, and will be joined by volunteers of the community, specifically men. 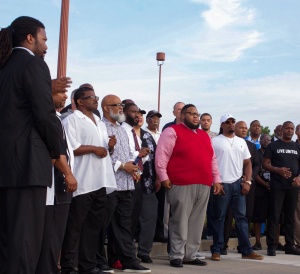 Brandon Perry, founder of City Kids Care, a non-profit organization which gives back to the city of Youngstown, and Charles Banks, a recent Youngstown State University graduate, came up with the idea of the 100 Men Cheer and Greet for the Youngstown area.

“This summer, Brandon Perry and myself thought of this amazing idea to have men in the community greet the students as they enter school on the first day and it morphed into this amazing 100 community men unity event,” Banks said.

Perry and Banks called for 100 men to volunteer, but said the response from the community was beyond that. Nothing like this has ever been done before in the area, according to Krish Mohip, CEO of Youngstown City Schools.

“I think the 100 men initiative goes to the heart of what we are trying to do, and it wasn’t us who did it. It was the community that came up with it,” Mohip said.

Men from Youngstown and Warren came together on Aug. 22 to kick off the initiative and welcome back students to Warren G. Harding High School. Perry said although the movement was initially started for Youngstown City Schools, some community members of Warren reached out and asked if they could bring the movement to their city.

Roughly 100 men were in the entryway of Warren G. Harding chanting and cheering as students walked in. High fives, handshakes and words of encouragement continued for more than a half hour.

Perry said it is important that the men are coming together for a cause such as this, and stresses the importance of men becoming involved in the community. 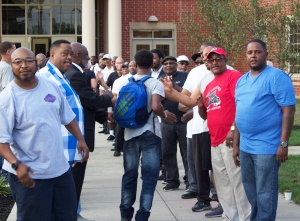 “When you think about school, the first thing that comes to mind is the mother. There are a lot of absent fathers,” he said. “Probably more guys want to do this type of stuff but aren’t given the opportunity.”

Banks said having men step up in this way will serve as motivation for young men in the city.

“I think it’s important in our communities and inner cities nationwide because I think a lot of men get a bad rep in the urban communities and it’s more common to see a single parent mother than father,” Banks said. “We want to show them that there are successful men that look like them that they can look up to and aspire to be like.”

Banks also said having men greet the students is important and can help ease the first day nerves for the students.

“I think this is important because this helps students with a sense of pride on the first day,” he said.

Mohip and Perry both agree this initiative is just the start and would like to keep moving forward with the men of the community.

“We want to start a program, we want to keep the men working in the community,” Perry said. 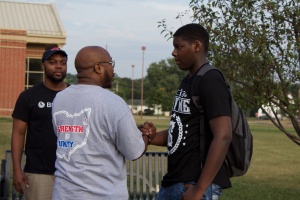 Groups of men will meet at both East and Chaney High’s first day beginning at 7:45 a.m. and more volunteers are welcome. Mohip said he is not sure which school he will end up at yet, but he will definitely be in attendance.