The jokes went to the dogs at Suzie’s Dogs & Drafts on Sunday, April 8 as local comedians performed to raise money for the Every Dog Matters Rescue.

Amanda Hamilton works with Every Dog Matters. She said the need for places that rescue dogs has increased since the local charity opened its doors in July of 2016.

Hamilton said the goal for the night was to raise $1,000 which would go towards vetting. To draw a crowd, the charity partially relied on these valley comics, one of which was Joe McCormick. 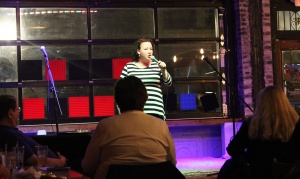 With six years of experience and having performed a few shows in different states, McCormick has dealt with trying to attract larger crowds, and gauging the audience to see what jokes work.

“When you’re up there, you have to be the boss,” McCormick said. “You can’t be afraid up there because otherwise they’ll eat you alive.”

Along with performing, McCormick was also in charge of selecting other comedians for the show. One man McCormick selected was Shane Herman. Herman said a huge selling point for him to do the show was because it was for the dog rescue.

Herman has been a stand-up comedian for 11 years. He got his first taste for the stage when he won a comedy contest while in school at Bowling Green University.

Herman describes his routine as high energy, and said his material touches on pop culture, but with bizarre twists. He said it’s adult-oriented material, but he can also go clean as well.

“I just want to show people that they don’t always have to take everything so seriously and can sometimes lighten up a bit,” Herman said.

Getting laughs from the crowd is something Herman admits can become pretty addicting, but sometimes trying to reach this high can be tough.

McCormick can attest to this, comparing his current hobby of stand-up to one of his past professions. He said he served in the Marines and stand-up comedy has been more difficult for him than that.

“The marines was more physical and group-oriented, but it’s just me and the mic on stage, so if something messes up, it’s my fault,” McCormick said.

For Herman, one of the hardest parts of being a comedian is there is no instant gratification. This is why he feels every comedian must be resilient.

“You need to have self-assurance; believe in yourself,” Herman said. “You also have to be willing to grind for a long time.”

Grinding is something McCormick also mentions, saying it generally takes 10 years for a comedian to see a generous amount of notoriety.

Within this span of time, both Herman and McCormick said shows will happen that make this grind a little more difficult. However, the shows that go perfectly are what keep them performing within Youngstown and beyond.

McCormick’s next few shows will be out of state in West Virginia and Pennsylvania, and Herman’s is April 29 at the Whistle and Keg downtown.