A spooky celebration brings students and faculty together during the Halloween holiday while giving back to those less fortunate.

The 10th annual Halloween Costume Contest hosted by the Department of Communication at YSU is celebrated with a costume contest, ax throwing, prize raffles and food and beer specials, with the proceeds benefiting the American Cancer Society.

Jeffrey Tyus, associate professor of communication at YSU, said he saw this as an opportunity to give back after beginning his career at the university. 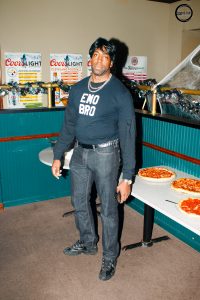 “I have done some charity work at all of the institutions that I have taught at. It’s one of my personal passions,” he said. “I wondered if I could host some type of fundraising event that would bring this place some business.”

Tyus said he wanted to incorporate Halloween festivities into his new idea and set the date each year for the last Thursday in October.

“I wanted to combine Halloween with some type of fundraiser, and my students just looked at me like I was crazy,” Tyus said. “I told them I could do it, probably.”

After collaborating with Inner Circle Pizza as the former venue and spreading the word across campus, Tyus said he was thrilled with the outcome of the first fundraising event.

“It was packed that night,” he said. “People donated nice prizes, and the pizza was donated by the owner. … I made around $400 that night, and each year I added something to it.”

According to Tyus, his efforts have increased the donations given by the faculty to the American Cancer Society since 2009.

“Our department has always had a Relay for Life team, and each spring we give a donation to the American Cancer Society,” Tyus said. “This event is an opportunity for students to participate in our fundraising effort.”

“One aspect of the class is event planning and putting together a campaign over several weeks that will culminate into an event,” Tyus said. “I let them throw in their own little niches to it.”

The main attraction each year is the costume contest, and this year’s contest will be judged by YSU’s President Jim Tressel.

Tyus said he encourages attendees to enter the contest, but they should be ready for fierce competition.

“Some previous costumes I’ve had … I was a clown one time. Another time, I had a student who was emo, and I wore a wig and skinny jeans in all black,” Tyus said. “I like to get into the spirit of the event too, and I encourage my students to do the same thing.”

Jaietta Jackson, senior lecturer in the communication department, said seeing her fellow professors in “wacky outfits” off campus brings them together for a good cause.

“The most memorable part of the event are the costumes,” Jackson said. “Dr. Tyus always has a unique and great costume. I can’t wait to see what he will wear each year.”

Jackson ensures all proceeds raised at the event are given to the Department of Communication’s Relay for Life team, which are then donated to the American Cancer Society.

The entertainment will feature a local band called Northern Whale, and Jake Capezzuto, YSU alumnus and lead singer of the band, said he is familiar with the contest.

“The event itself is really great. It’s a huge group effort from all of the classmates putting it on,” Capezzuto said. “It’s always a really big success and the turnout is always awesome.”

Capezzuto said he encourages the community to come see the performance and support YSU’s communication department.

“YSU students and faculty should come out to see us perform just to support the event being put on by a class of YSU students,” Capezzuto said.

The festivities will be held Oct. 31 at 7 p.m. at Rhine Haus Bier Hall.