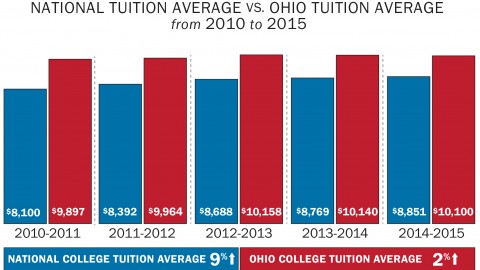 With the increasing costs of higher-education dominating national policy conversations, Ohio Governor John Kasich has issued an executive order creating a task force to examine areas in which the state’s public universities can increase operational efficiency and reduce costs.

According to a press release, “the new, nine-member task force will examine a number of opportunities where schools can lower costs and increase efficiencies, such as shared services and outsourcing, administrative staffing levels, more efficient space utilization, elimination of low-enrollment courses, intellectual property that has potential to be commercialized and the use of technology to reduce costs.”

This announcement comes on the heels of Republicans in the state senate, led by senate president Keith Faber, introducing Senate Bill 4 which would require all Ohio public universities to reduce their costs to students by 5 percent.

Kasich alluded to Senate Bill 4 in the press conference announcing the task force.

“I know how difficult it is for these institutions to bring about a significant amount of change. It gets to be about culture, about the way we’ve always done things, and so we want to give them a chance to adjust, but they’re all willing, able, ready and anxious to start to move to deal with these cost problems,” Kasich said. “And I would caution anyone who wants to get involved in massive cuts to the universities to wait.”

The Perils of Price Controls

Neal McNally, interim vice president for finance and administration at Youngstown State University, said YSU currently receives $100 million in revenue in tuition and fees and a 5 percent reduction would be significant.

“You can do the math pretty easily and see that the 5 percent rollback on that price is going to cause a $5 million reduction in our revenue, so it would be devastating to us,” McNally said.

He also pointed out that the state has been asking for universities to reduce time to degree completion, which runs contradictory to the goal of reducing costs.

“We’d love to get students through a four-year degree in four years and reduce the average that’s upward of six years currently. But in order to do that, you need to be able to provide adequate course sections and course offerings, you need to provide adequate student advising, all those sorts of services you need to provide. And if you reduce our price, and reduce our revenues, we’re not going to have the ability to fund those other types of services and course offerings and all the additional things we need to fulfill the state’s other goal of helping students graduate sooner,” McNally said.

“If you’re just forcing the price to be lower, that has to have an impact to these institutions as far as the quality of the education that can be provided, so sure it’s going to reduce the price to students, but it’s also going to reduce the quality of the education students receive,” Sumell said. “It’s going to force colleges to have cutbacks which will negatively impact students.”

He said increased subsidies would be a better way for the state to affect prices, noting that dramatic cuts in state support over the past 10 years have been the main cause of increasing tuition costs nationwide.

“You achieve the same outcome [with subsidies], but without any of the inefficiency associated with price controls,” Sumell said.

While Kasich’s task force offers an alternative to Senate Bill 4, he is still imposing price controls, allowing tuition to rise 2 percent next year before instituting a freeze in the following year. He also suggested that further cuts could come if the task force was not successful.

“I reserve the right to say within the course of the next year, if they cannot enact these changes because of sclerosis in the universities, then I think you start just cutting funding and tell them to deal with it. But to me that’s not the best way to do things, the best way to do things is to have a team of people committed to this common goal,” Kasich said. “I would prefer in the course of this next nine months, 10 months, to give them a chance to do this before we take an axe to them.”

McNally said rising healthcare and energy costs — things that can’t necessarily be solved by increasing organizational efficiency — have placed pressure upon the university. He also noted that despite that, tuition increases at YSU have been below inflation on average over the last 10 years.

Sumell said increasing efficiency where possible is important, but costs are not the only thing legislators should take into account.

“If you can have a reduction in costs and [have] it not negatively impact the quality of education to students, then of course, it’s a great idea, but that’s not always going to be possible,” Sumell said. “The presumption that lower costs are always better is actually not true, because we have to consider what’s the loss in terms of quality of education to students.”

McNally said he hopes the task force will avoid a one-size-fits-all approach.

“Each university in the state is positioned very differently in terms of their academic mission, the students they serve, all sorts of things. Miami University is a very different school than Cleveland State for instance, and you can go right down the line,” McNally said. “So any sort of recommendation they have needs to take that into account … because we’re all doing something a little bit different.”

Jim Lynch, communications adviser for Governor Kasich, noted that Ohio is already outperforming most of the country in this regard.

Kasich also pointed this out in his press conference while touting recent changes made in the way resources are allocated and the move to performance-based funding.

According to Sumell, these achievements should allow legislators to ease the pressure on the state’s public universities.

“You would think just based on the fact that we’re doing better than any other state in the nation, as far as mitigating the impact of the state reductions to students, that we would be rewarded,” Sumell said. “Something like, ‘You’ve done such a great job. Here’s what we’re going to do. We’re going to increase support and expect that you will reduce costs to students,’ but instead it’s, ‘We’re not going to increase support. We’re just going to ask that you continue to cut costs to students and potentially ignore the impacts of continuing to cut costs.’”

He also said that if the pressure continues, the short-term focus on price could create significant problems for the state’s higher-education system and economic development in the long term.

“The impact of those cuts could put as at a competitive disadvantage as far as the quality of our education system compared to other states, and that would eventually have an impact to our long-term development from an economic perspective,” Sumell said. “So even if it helps us initially, maybe we can’t actually hire the most qualified professors at these institutions anymore, or maybe the rankings of Ohio state universities go down and international students are less attracted to Ohio state universities as a result, or maybe just the quality of the education of students in Ohio decreases as a result, which maybe doesn’t have a negative impact now, but would inevitably have a negative impact in the future.”