Paul McFadden, president of the YSU Foundation, tipped the governor’s hand in appointing Samuel Grooms to the Youngstown State University Board of Trustees.

Grooms’ meeting with Gov. John Kasich was moved from Wednesday to Thursday, but Grooms received a call from McFadden Wednesday afternoon. 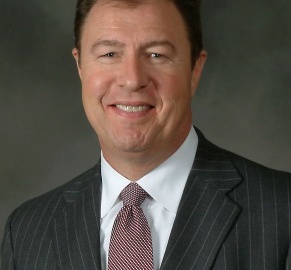 “Paul said he was thrilled to hear one of his former football buddies was taking a leadership role at the university,” Grooms said. “I said, ‘Paul you might have just let something slip here.’”

After an hour and fifteen minutes of vetting, Grooms was given the opportunity to serve on the board. He said his love of YSU led him to accept the offer.

“I love the university; I love education,” Grooms said. “I think that’s what’s going to be the difference in what solves a lot of the problems of the world.”

Grooms came to Youngstown State University in 1977 to play football and get an education. He has served as CEO of Hy-Tek Material Handling, Inc. in Columbus since 1997. Grooms will fill the seat vacated by Harry Meshel, whose term ended in April. The seat left open by the late Jim Greene has yet to be filled.

YSU President Jim Tressel suggested Grooms as a candidate for the board. Grooms said Thomas Shipka, former chair of the department of philosophy and religious studies, introduced him to Tressel when he coached at YSU. The two have remained friends throughout the years.

“Jim is somebody I had a lot of faith in. Not so much as a guy that was going to win national championships, but as a guy who understood how to lead young people,” Grooms said.

He said that quality led him to write a letter to the editor in support of Tressel when he was mentioned as a candidate for the YSU presidency.

“I had a lot of faith in Jim, and at this point, from what I’ve been told, he’s done a fantastic job,” Grooms said. “He’s somebody I really look forward to working with.”

Following Charles Bush, Grooms is the second consecutive Trustee to be appointed from the Columbus area. Many people voiced concerns regarding Bush’s ability to understand the needs of the YSU community while living in Columbus.

Grooms said this would not be an issue.

“I’m there quite regularly anyway, and I have a lot of friends still in Youngstown,” Grooms said.

He said he thinks the Governor intended to recruit candidates from outside the university’s backyard.

“[He wanted] to find somebody that had a strong love of the university and a strong feel for education that wasn’t right in the Mahoning Valley … to maybe give it a little different flavor,” Grooms said.

“We try to balance boards with a diverse group of backgrounds,” Andrews said in an email.

The board currently comprises three lawyers, two doctors, two businessmen, a retired teacher and a journalist.

Grooms said the skills possessed by successful businessmen could benefit universities since the majority of problems educational institutions are budgetary.

“I don’t care whether it’s a school or a business or what it is,” Grooms said. “I think that certainly can’t hurt any institution, so if I can bring something of that nature to the board I’m looking forward to being able to do that.”