Over 200 people came to the opening night of “Carrie the Musical,” which was a collaboration between The Millennial Theatre Company and The Oakland Center for the Arts. The musical was held at DeYor Performing Arts Center on Oct. 30 and 31.

The musical was The Oakland’s comeback after a year and a half of not producing adult programming. Brendan Byers, the executive vice president and artistic director of The Oakland, said when it lost the space in downtown Youngstown, it looked like The Oakland was going to close forever. 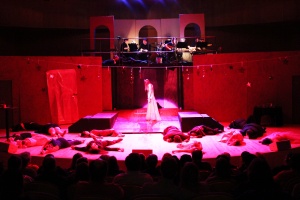 Byers said he was approached by The Millennial Theatre Company for the collaboration between them and The Oakland and thought it was a perfect fit. He said the group has received a lot of positive feedback and will now be performing their shows at DeYor.

“’Carrie the Musical’ was the fastest closing show on Broadway,” Byers said. “In 2012, somebody looked at it again and said, ‘I bet this can be re-worked.’”

Byers said the focus of the musical was changed, and if you look at this musical, the songs the mother sings are the only ones from the original show. He said the rest of the musical is new, but it’s still close to Stephen King’s novel.

“It’s what you can do with a live version of it,” Byers said. “You’ll see the blood at the end and almost the whole cast except for one person is under 35.”

Joe Asente, the director of “Carrie the Musical” and the artistic director of The Millennial Theatre Company, said he was excited about the opportunity to bring Carrie to life. Asente said “Carrie” is one of those musicals a lot of theater companies are afraid to tackle. The subject matter and the reputation of the show is something this area hasn’t seen before.

The first show Asente directed was “The Little Mermaid” at his college, Ohio University, and he has directed for the Athenian Berean Community Players. Asente came back to Youngstown to find other directing opportunities. The Millennial Theatre Company started because there were none available.

“Theaters are resistant to letting younger people direct their shows,” Asente said. “Me and my friends decided to form our own theater company, so that’s where The Millennial Theatre Company came from.”

Asente said The Millennial Theatre Company is focused on giving opportunities to actors, singers, directors, musicians and choreographers between the ages of 18 to 35, which was incorporated in “Carrie the Musical.” He said it’s been awesome to get the full, staged experience with people his own age.

“I think that the story of ‘Carrie’ is really just a metaphor for everything else that goes on in society with how differently we treat people,” Asente said. “It’s not a show without a message.”

Mariah Cresanto, who plays Carrie White, said the cast worked on the musical for about two months. She said although it’s been stressful, being the lead role in this musical was a great experience for her.

Cresanto said being in musicals has helped her express herself and her favorite part in “Carrie” was having blood dumped on her.

“I didn’t actually start doing musicals until about my senior year of high school,” Cresanto said. “I met Joe when I did ‘The Little Mermaid’ this past summer, so that’s how I knew about ‘Carrie.’”

Cresanto said she felt very prepared to take the lead in the musical, but it was also nerve wracking for her to fill the position of such an iconic role. She is a vocal music education major at Youngstown State University and said this was one of the most enjoyable things she’s done.