Political commentator for NPR and ABC News Cokie Roberts spoke at Stambaugh Auditorium on Jan. 11 with about 1,000 people in attendance as a fundraising effort for WYSU, Youngstown State University’s radio station.

Roberts has also written six New York Times bestsellers and won three Emmys, among many other accolades in over 40 years in the broadcast industry.

Roberts discussed the political atmosphere, both past and present, women’s issues, the pushback on media since President Donald Trump took office and the impact of millennials on society.

Roberts said she always discusses whether or not this era is the most polarized time in history, but she said it is not. She said in the past, politicians would murder each other over political speech.

She discussed the duel between Aaron Burr, the sitting vice president of the United States in 1804 and Alexander Hamilton, the former secretary of the treasury — where Hamilton was killed.

After World War II, congressmen from different parties were able to argue about political stances, but come to an agreement in the end, she said.

“People in Congress understood that the enemy was not the guy across the aisle, it was the dictator across the sea and that was a much more cohesive time,” Roberts said.

Roberts said Democrats and Republicans in Congress today are unable to get to a place where they agree with each other, which leads to problems. In addition, she said today the people of the United States are living through different times, where it is much more difficult to come to common ground in politics.

“It’s all a mess because of this hyper-partisanship. People get so dug into their ideological corners that they accept anything if they think a person is going to vote the way they are,” Roberts said.

She said one way to fix this problem is to elect more women in Congress because they are found to be less ideological and willing to cross party lines. Currently, 354 women have said they are going to run for Congress this year. 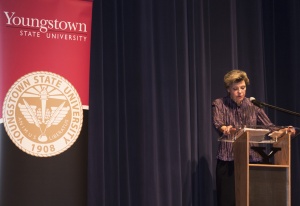 said one of the biggest problems today is that facts are being called into question. She said journalists need to make the case for facts through their reporting.

Roberts also said it took decades for people to move on interracial marriage, but it took just a few years for that to happen with gay marriage.

“It’s a very interesting young group of Americans,” she said. “It is much more diverse and much more tolerant than any other generation we’ve had in this country.”

Attorney Ron Slipski, a political and international relations and criminal justice and forensic sciences lecturer at YSU, attended the event and said he agrees with Roberts about millennials’ tolerance and acceptance.

“[With] the young people that I encounter, which are primarily my own children and YSU students, I believe there’s a trend toward more tolerance,” Slipski said.

He said he believes college students that he has come across in the past have been accepting, though.

Slipski said he likes Roberts’s optimism despite what is going on in the political atmosphere today.

Barbara Krauss, the WYSU employee with the longest tenure, host of the Morning Edition and the Classical Music host, said she has admired Roberts for many years.

“[Roberts] has built a reputation as one of the most respected news correspondents anywhere,” Krauss said.