Susan Clutter, assistant professor of forensic science at Youngstown State University, delivered a lecture titled “Everything I Know About Life I Learned from Dead People” on Friday as part of Student Government Association’s Last Lecture series.

Last Lecture was inspired by Carnegie Mellon University professor Randy Pausch, whose lecture to students after being diagnosed with pancreatic cancer went viral.

Clutter said she struggled with devising a lecture that conveyed life lessons. 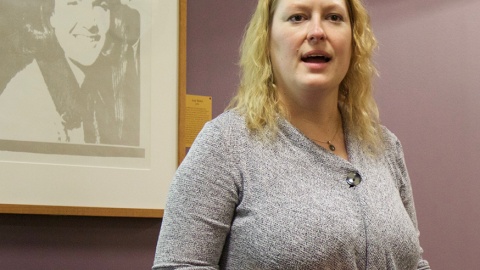 “I can talk about blood spatter all day long,” Clutter said. “I’m still learning, so I do not know how to impart wisdom without sounding like a public service announcement.”

Clutter worked in the field for 10 years as a crime scene investigator before obtaining a master’s degree and entering education. She has been at YSU for 10 years.

“Most of what I have learned, I have learned from people that have passed on,” Clutter said. “I want to start the lecture on dead people, some who are dear to me, and some who I did not know about until they died.”

She began by speaking about her uncle, who was murdered when she was young. She attributed her interest in crime to this experience, as well as a visit she made to the FBI as a child.

Her second example was Robin Williams and specifically the message he delivered in the movie “Dead Poets’ Society.”

“This is about living life to the fullest,” Clutter said after showing a clip from the film. “Seizing the day is something we say, and we forget to seize the day, or we think we are seizing the day, but in reality we are living by the minute.”

Her third lesson was that drug abuse affects everyone, and there isn’t a stereotypical drug abuser.

“Baltimore taught me just how many people are affected by this,” Clutter said. “It is preventable.”

She suggested that people turn to drugs because they forget what their purpose is. When we are children, we have a very clear idea of what we want, but it becomes less clear over time.

“It is really sad because at five we know what we want and at 15 we lose sight of that,” Clutter said. “Somebody at some point questioned what you wanted to be.”

Her next lesson expounded on this point by talking about her Calculus II professor in college. Clutter said she keeps her professor’s obituary between her two science degrees to remind her never to discourage students from pursuing their dreams.

“The last thing anyone wants to hear is what they should do; we want to do what we want to do,” Clutter said. “Dump people who are not helping you. You do not need that extra weight.”

The next lesson was about an officer that went missing in action in Vietnam, whose bracelet she wears, and an unsolved disappearance where she worked as a crime scene investigator.

“These are symbolic for me,” Clutter said. “Sometimes in our life we are not going to see justice. Sometimes justice takes a long time.”

She encouraged students to be proud of their accomplishments, mentioning past students that have handed in their theses and told her how terrible it is.

“This is your thesis, your big thing, and you are not proud of it?” Clutter said. “We need to start feeling better about the things we do right.”

She also said students need to own their mistakes and maintain their sense of humor. She encouraged students to avoid procrastinating, and said they are nearing the point in their lives where they can no longer use being young as an excuse.

At the same time, she said we need to put our anxieties and anger in perspective.

“You do not want to be so anxious that you don’t even try,” Clutter said. “At some point we have to say, ‘you know what? At the end of the day, nobody cares about my grades in this class or this assignment.’”

Tyler Miller-Gordon, SGA’s current secretary of technology and president-elect, introduced the lecture. He said working with her to create a promo video for the event gave him insight into her life.

“The crowd of just under 100 people proved the impact she has on student’s lives,” Miller-Gordon said. “I thoroughly enjoyed it!”