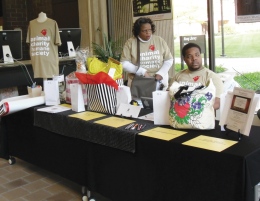 After a string of local animal abuses made news in February, a group of Youngstown State University students began organizing a parade to raise awareness about animal cruelty.

The Dog-A-Thon: Walk for Animal Cruelty was created by Adrian Watson and his classmates — group name: KatDog — for communication instructor Dorian Mermer’s class.

Watson said he and his fellow group members feel strongly about rescuing stray animals and protecting them from cruelty.

“We heard about the dogs that were viciously thrown over the highway bridge and felt this fundraiser would be a great way to bring the animal cruelty to people’s attentions,” Watson said.

Mermer asked her students to create a sustainable organization.

On Saturday, the group will host a parade at the corner of Schenley Avenue and Rosewae Drive. It will have live music and a social mixer for animal lovers.

Registration begins at 2:30 p.m., and the parade begins at 4:30 p.m. Anyone willing to support the cause is welcome to walk in the parade.

Watson said this fundraiser is different from most because participants are not simply asking people for donations.

“We’re offering them perks to be a part of this animal cruelty awareness movement,” he said. “For example, we offer givers the opportunity to sign the ‘We Love Our Animals’ banner, which will be donated to the [Animal Charity] office.”

Last week, KatDog hosted a 50/50 raffle and silent gift auction. The group has raised nearly $600. Additional donations included $80 in season tickets for YSU’s department of theater and dance, a $45 gift basket from Jazzman’s Cafe and $50 in dance lessons from Fred Astaire Dance Studio.

Rhonda Owens, Watson’s classmate, said that although the group faced planning difficulties, she was motivated to raise the most money for extra credit in the class.

Talia Musolino, general manager of Animal Charity, spoke to Mermer’s class before the project was initiated.

“The students asked a lot of fundraising questions, and I told them not to worry about how much money is involved or how much they raise,” Musolino said. “Any event that benefits our facility, not just financially, but just to get the word out there that these animals are here and need adopted is great.”

Mermer said she has been teaching the class for six years and finds this hands-on experience worthwhile.

“It gets small businesses involved and helps the students make connections,” she said. “They have experienced a lot of curveballs, but they are still learning how to form a small micro-organization.”