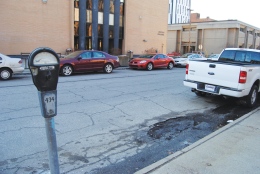 A pothole on Lincoln Avenue remains as a result of winter weather. The Youngstown Street Department struggles to fill all potholes, but has been making progress. Photo by Kevin Alquist/The Jambar.

Though potholes can form at any time of the year, winter leaves the roads susceptible to water seeping into cracks and freezing. Vibrations from roadway traffic hit weak spots in the pavement, resulting in erosion.

“Cars and trucks drive over these spots thousands of times per day, and problems begin to occur,” said Sean McKinney, the city’s buildings and grounds commissioner.

While every road in the city is considered important, streets are separated into primary and secondary roads. Fifth and Wick avenues are examples of primary roadways.

The roads surrounding and through campus are high traffic areas and are considered a high priority.

“At any of the city schools and the university, we do our best to take very good care of road conditions,” McKinney said. “That ranges from snow and ice removal to filling potholes.”

“Foremen and members of other city departments, such as the water or fire department, call in and report the potholes to us, and we send a patch crew to take care of it,” McKinney said.

The street department also requests that citizens call the city to report potholes that need attention.

“It’s set up so citizens can help the city help them,” he said.

Potholes are also a priority during the citywide cleanups sponsored by Youngstown’s litter control and recycling program.

The cleanups are done once a month in the spring, summer and fall. This year, the first event is on May 19.

Gregg Sturrus, chairman of the physics and astronomy department at YSU, said though there is little effect on the motion of the car, a lot of damage can still occur.

Sturrus said depending on the speed of the car and the depth of the pothole, running over a pothole can severely affect a car.

“To slow a car down, there needs to be horizontal force. When a car runs over a pothole, it is hit by a mostly vertical force,” Sturrus said.