The City Club of the Mahoning Valley held a panel discussion titled “The Future of Public Education in Ohio’s Cities” on March 6 at the Stambaugh Auditorium.

The panelists were Joe Schiavoni, minority leader of the Ohio State Senate; Christine Fowler-Mack, chief of New and Innovative Schools and Programs in the Cleveland Metropolitan School District and Krish Mohip, the CEO of Youngstown City School District. 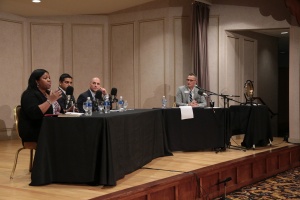 Tim Francisco, a Youngstown State University assistant professor in the English department, moderated the event. He asked the panelists if they thought there was a move towards privatization in education after the confirmation of Betsy Devos as secretary of education.

Schiavoni said nobody should be surprised that Devos was confirmed as secretary of education because President Donald Trump talked about pushing for school privatization in the presidential debates.

A bill that was introduced last week would require states to adopt vouchers to maintain their eligibility for federal funds, which could damage public schools, he said.

Under this bill, parents could take excess tuition and bank it for future education expenses, like college.

“How unfair is that to someone who isn’t eligible for a voucher because their parents are one dollar over the threshold?” he said.

The discussion turned to the top concerns that the panelists have as far as education.

Mohip said there is too much testing, and the excess testing prevents students from learning because they are too worried about studying for the frequent tests.

Schiavoni shared that sentiment, saying mandates that require more testing are increasing. He said kids are too stressed about how they will perform on tests, and teachers are worried that poor test grades will reflect badly on them.

Testing should be like the IOWA tests, Schiavoni said. He gave the example of himself taking the test as a kid and finding out he needed to work on understanding science better, and said testing should be designed in a way that shows students what their strong and weak points are.

Another concern, Schiavoni said, is that sports and extracurricular are cut when levies don’t pass in communities, which students “desperately need”.

Francisco brought up House Bill 70, an Ohio legislation signed by Ohio Governor John Kasich that created the Youngstown Plan, which has been criticized for allowing a CEO to run Youngstown City Schools.

As the CEO of Youngstown City Schools, Mohip said House Bill 70 is beneficial in a district that was struggling. He said he has a great relationship with the YCS board members, and he welcomes collaboration with the community to help improve the school district.

“I’m excited about the work we are doing,” he said.

Schiavoni warned that allowing House Bill 70 to pass could lead to other districts passing similar legislature, and those CEO’s might not be like Mohip.

“There is an opening for a CEO to do whatever he or she wants in the next district,” he said. “We need to put safeguards in place or else you will eventually see someone who will take over immediately to turn all the schools into charter schools and call it a day.”