The city’s very first peace walk, bonfire and cypher was held under the Market Street bridge downtown on Sunday.

Groups of people met at four different locations, each representing one of the four sides of town. They then marched together in unison, meeting at the corner of Front Street and Market Street. 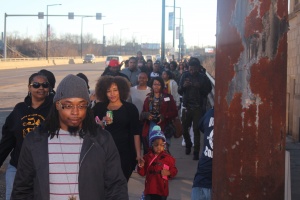 The peace walk was organized after several citizens from the city decided it was time to put their differences aside and come together as a community. Youngstown’s The Colony, a non-profit, played a large role in organizing the event.

Keland Logan was one of the event organizers. He said there are plans to make the bonfire a monthly event so they can continue to make an impact on the city.

“Despite our differences and despite whatever it is we may disagree on, we decide to come together for the greater good of the whole,” Logan said.

According to Logan, the idea for the peace walk came after a meeting between Youngstown Mayor John McNally, William “Guy” Burney, executive director of the Community Initiative to Reduce Violence for the City of Youngstown, and several residents that wanted to help put an end to a local feud.

“Today we’re here because we need to come together as a community and find out different ways to support and love and encourage our youth,” said Oliver. “Right now is the time the city is going up, and we don’t want to do anything to make it go back down.”

After the welcome message, pastor Jeff Stanford lead a prayer, asking for everyone to grab ahold of the person next to them to show a sense of unity and love.

McNally spoke to the crowd stating that in order to change the city it starts with these kinds of meetings.

“Youngstown is changing; Youngstown is going to recreate itself, it’s going to rebuild itself,” said McNally. “I want you to take that message home to your neighborhoods, south-side, east-side, west-side and north-side. Tell your friends”

During the next part of the event, local rappers were able to take ahold of the microphone and participate in a cypher, an activity where a group of rappers gather in a circle and express themselves lyrically.

Some of the verses from the local rappers included feelings toward the police, the violence in the city and the need for change.

Guests in attendance were also welcomed and encouraged to take the mic and express themselves through words, songs or raps.

Several people took the chance to speak to crowd, calling for an end to violence and a challenge for change.

One of the speakers was Derrick McDowell, founder of the Youngstown Flea.