While Massenet kept magical aspects of the story in his opera, it is slightly different from the Disney version of Cinderella.

Lindsay Heavner, who played both roles of Cinderella and the evil Stepmother, said this was her first, full-length opera. She said she has done opera scenes in the past, but it’s an entirely different animal to do a full-length opera.

“It’s very, very cool,” Heavner said. “Working with the cast I have is truly a blessing. They have been nothing but supportive. I don’t think I would be able to do what I do without them.”

Heavner said this opera was double-casted, so other people have played the same roles as she did. In this case, she was able to ask them questions like, “Did I mess up on this part?”

“It’s just a huge help to have people,” Heavner said.

Heavner said she tried acting in high school just for fun and discovered she really loved it. She said both of her parents are music teachers, so that also was motivation for her.

“Going into college, I decided to major in it,” Heavner said. “Just on a whim. I didn’t think I’d like it, but it turns out I love it.” 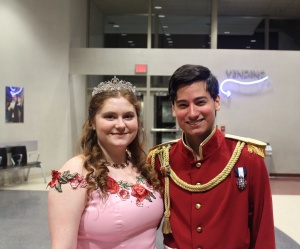 Heavner said she wants to thank her directors, teachers and cast members for being there for her. She said it’s been a huge privilege to work with them.

Katy Howells, who played Prince Charming, said she had a friend, who is an older woman who sang opera in California when she was younger, influence her to get into this field of study. She said there was a lot of music to learn for this opera and a lot of hard work.

“We all put blood, sweat and tears into this opera,” Howells said. “We’re all friends, so it was like hanging out and making good music for five to 10 hours a week.”

Kristina Clemons, who played a fairy/princess, said this field of study was always something she’s wanted to do. She said she’s been in choir, band and orchestra since the third grade.

“I wanted to take what I had and expand on it,” Clemons said.

Clemons said this opera was built from the ground up and it was a real, bonding experience.

David Mouse, who played Cinderella’s father Pandolfe, said he did choir in high school, and when he got to YSU he decided to become a classical voice major.

“When I first saw the opera program here doing a fall recital, it really gained my interest,” Mouse said.

Mouse said one of his favorite things about this opera was the experience of rehearsing for such a big performance. He said the cast got to develop characters not only as their own, personal character, but how you relate to others.

“How you express to those others while also making it entertaining and being present on stage,” Mouse said. “That’s a challenge I really enjoy.”

Gary Lehman, director of the opera, said the students involved are wonderful, young performers at the university. He said they were very receptive to all of his ideas, and he is very happy with how the cast has worked.

“They have been there from day one,” Lehman said. “They’ve known their music. They’ve been ready to go from the first day of staging.”