The SOAP Galley is celebrating its one-year anniversary with the premiere of their first national show, “Artist & Model”, featuring a new style of work by Youngstown’s own Chris Yambar. 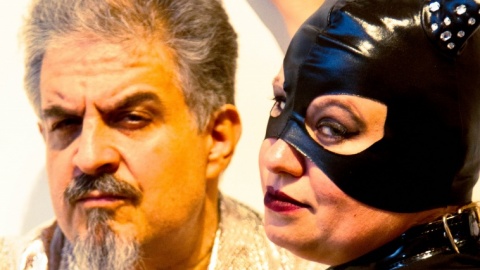 Yambar has been painting for 30 years and has created over 4,000 paintings and images combined. The show is a breakaway from Yambar’s traditional pop genre and makes an entrance into a more traditional fine art subject matter.

“After 25 years I decided I wanted to take a break and think about what I wanted to do. Most artists keep doing the same thing, or they go through a process called reinvention,” Yambar said. “That is how I came up with the idea for “Artist & Model”.”

“Artist & Model” is the celebration of women and the beauty and power of the female form. The female form has been a tradition throughout art history and all world cultures. The show is the first part of a much bigger series to come. There are two hundred pieces in the exhibit, and all of the work is based on the same anonymous model.

“I knew the model for a long time. What’s great is she has followed my entire career, and I have known her most of her life,” Yambar said. “It just hit me when I had the concept for doing the show that I had to talk to her and see if she wanted to do it, she was interested.”

Yambar and his model have a special relationship based on trust. The two are bound by contract, but this doesn’t stop their ability to create powerful art.

“I had a contract drawn up just for her. She receives a percentage of the painting price and a percentage of merchandise where her image appears,” Yambar said. “She is powerful, beautiful and amazingly playful, and that comes across in the show. It is the rare mix of what I call the perfect woman.”

Daniel Rauschenbach, co-owner of the SOAP Gallery, feels the show represents all aspects of Yambar’s character.

“Yambar is a full of life character, he is always smiling, always has a great story and is full of energy. That is what this show is. It represents all aspects of Yambar,” Rauschenbach said. “The show is a curiosity.”

The exhibit’s opening reception is Friday from 8 p.m. to midnight. It is a $30 event and will feature a burlesque show, live band, food and drinks. People who attend the event get to leave with a “swag bag,” which includes a limited edition signed print, pillowcase and event button. Attendees are also encouraged to participate in a special fetish lingerie and fantasy cosplay fashion walk for valuable prizes.

“There will be vendors outside from 2-8 p.m. Saturday. It’s going to be the ‘Happy Birthday SOAP Gallery’ event,” Rauschenbach said. “It is our one-year anniversary. Throughout the month we will have artist lectures going on, along with a Halloween party and a closing for Yambar’s exhibit Oct. 28.”

Yambar plans to do an Artist & Model lecture, where he does a walkthrough of the show, talks about the designs and the artist and model relationship. There is no specific date for the lecture yet, but he may include some of this information Saturday.