Some students at Youngstown State University are hesitant to walk on brick walkways scattered throughout campus because they can be seen as dangerous when wet.

Elizabeth Terrell, pre-medical and psychology student at YSU, said she fell on the brick walkway outside Sweeney Hall on University Plaza.

“I’m always scared to walk there when it rains,” Terrell said. “I’ve twisted my ankle a couple of times.”

Terrell said the bricks are unsafe when wet and something should be done about them.

“I have added five minutes to my commute across campus in order to avoid the brick walkways,” Terrell said.

David Ewing, associate director of the grounds department, said these brick walkways are sealed once a year in August before the semester starts.

“We pressure wash it and mix up a batch of sealer with grit in it,” Ewing said. “This is put in a sprayer and we spray it on the bricks.”

Ewing said the red brick on University Plaza is a simple clay brick. 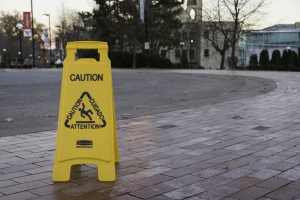 “The brick on Lincoln Avenue and Wick Avenue is a poured concrete with dye in it,” Ewing said.

Shauna McKinstry, early childhood education student at YSU, said she uses the walkways on Lincoln Avenue daily, and when it’s the slightest bit wet, it causes her to slip.

“I’ve slipped many times on this walkway and I’ve seen other students slip as well,” McKinstry said. “I don’t know what could be done to fix this, but it’s a hazard.”

Some students have gotten worse injuries than a twisted ankle.

Briana Cerneka, general studies student at YSU, said she slipped on the walkway by the tennis courts resulting in a sprained ankle.

“I sprained my left ankle because of these walkways,” Cerneka said. “I would really like to see something done about it.”

Ewing said students are able to file a police report to the YSU Police when they fall and become injured.

“If there is a police report, then the police will let us know,” Ewing said. “We will determine what to do from there.”

Cerneka said she didn’t bother to file a complaint because she believed nothing would happen.

“There was no point in me trying to do anything, because I feel as if I would have hit dead ends,” Cerneka said. “To me it wasn’t even worth making a big deal out of.”

As construction ended on Wick Avenue in October, more brick walkways were constructed, causing some students to worry.

“It doesn’t help that Wick Avenue just received more of these walkways,” McKinstry said. “It’s calling for a disaster just like the other ones on campus.”