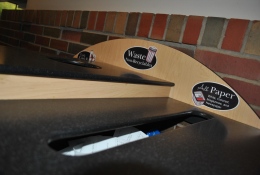 RecycleMania cames to an end on March 31. The national program has 6.2 million participants. Photo by Jordan D. Uhl/The Jambar.

Nearly one month into RecycleMania, several members of the Youngstown State University community are getting caught “green-handed,” which is this year’s campaign to increase recycling on campus.

RecycleMania is a national recycling competition that YSU has competed in since 2005. The 2012 tournament has 605 colleges and universities competing — with about 6.2 million students and staff involved.

Dan Kuzma, manager of YSU’s recycling program since 2005, said the campaign tactic is based on chain reaction.

Kuzma has placed spotters around several recycling bins on campus, looking for students who recycle into the proper bins. When spotted, the students will be slipped a random prize from the recycling team.

“The chain reaction, where one person in a crowded room gets caught recycling and then slipped a prize very quickly and quietly, works because that person gets excited and draws in the others around them,” Kuzma said.

So far, a handful of these prizes have been given to recyclers, with more to come as the competition continues.

YSU generally does well in the competition, and is now in 40th place. YSU’s recycling rate is around 60 percent, which Kuzma called an “ideal rate,” with 80 percent being his goal.

YSU has been participating in RecycleMania for the past eight years, but the tactics change each year.

“It might seem like we’re doing the bare minimum, but we’re doing what’s effective for us,” Kuzma said.

Next year, campaigning for the competition may be different, thanks to the addition of the University of Akron and Kent State University.

Kuzma said these schools will be used to foster local competition, creating banners and signs and possibly even a recycling scoreboard.