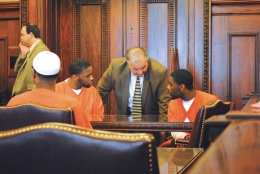 The six defendants involved in both of the off-campus fraternity incidents were in the Mahoning County Court of Common Pleas on Tuesday and Wednesday for hearings.

The five defendants connected with the February 2011 off-campus shooting at a fraternity party approached the beginning of the end as Wednesday’s status hearing brought a firm date for the jury trial’s Aug. 13 commencement.

“Absent a natural disaster, the state of Ohio and Columbus Jones will proceed to trial on that date,” Judge John Durkin said.

The trial was originally set to begin on Jan. 23.

However, a ballistics report, which was released by the Ohio Bureau of Criminal Identification and Investigation just two days prior to the trial’s scheduled commencement, caused an unexpected delay.

Durkin offered assurance to those closely involved, saying that he understood the anxieties involved with seeking closure in the case. He didn’t want to rush to trial, however, a decision that resulted in a procedural error and provided an opportunity for an appellate court to overturn the verdict.

“I just want you to understand my place as a trial judge,” Durkin said.

The court granted the defendants and their attorneys 90 days to have expert witnesses review the ballistics report.

Columbus Jones and Mark Jones each face felony murder charges for the death of Youngstown State University student Jamail Johnson, with the possibility of life in prison.

Jamelle Jackson and Brandon Carter are each charged with an obstructing justice charge, a third-degree felony.

Demetrius Wright is charged with carrying a concealed weapon, a fourth-degree felony.

Before Wednesday’s hearing, the five defendants loitered in the courtroom, talking amongst themselves, as well as with friends and family members who filled the benches in the back.

Their conversations got progressively louder, which offended Shirlene and Sidney Hill, Johnson’s parents.

“They come in smiling. How do you walk in and smile? That’s disrespectful,” Shirlene Hill said. “They should not be able to say one word to their families.”

The distraught couple fought back feelings of frustration as their son’s alleged murderers played around and laughed with one another.

“Can you believe this is court?” Shirlene Hill said. “You’ve got the young men on the outside talking to the ones on the inside.”

On Tuesday, six of the eight suspects in the Kappa Alpha Psi hazing case waived their rights to speedy trials. Jerome Justice and Lavell Sharp both saw their cases continued.

Seven of the eight defendants will go before Judge James Evans for their trial on April 30 at 10 a.m. Wade Hampton will have his hearing on April 25 at 10 a.m.

They each face two counts of felonious assault.

Raheem Satterthwaite, the ninth suspect, has yet to turn himself in; a warrant for his arrest was filed on Feb. 16.