Graduating seniors at Youngstown State University will bring memorabilia to life with the decision of decorating their caps. Those who are planning to take this action just may have that cap that will go down in history.

Savannah Osborne, who’s graduating with a major in nursing, said she definitely wants to have the initials RN and BSN on her cap and “Nurse Savannah” with a heartbeat sign. She said she’s going to have YSU colors and sparkles on her cap as well.

“This was my go-to thing,” Osborne said. “Just so I can look back on it and remember.”

Daziana Velasquez, also graduating with nursing from YSU, said she wanted to make her cap kind of creative and have a bow on the back. She said her grandpa is who got her into nursing, so she’s going to put something about him on one of the sides of the bow. 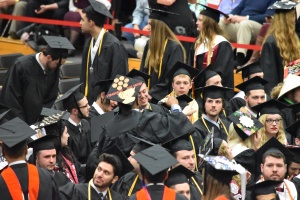 “He passed away, so I thought it would be like in memory,” Velasquez said.

Velasquez said she loves colors, so she took a bunch of pictures and wants to include, “And so the adventure begins” with a heartbeat, her name and the initials BSN.

“I’ve been looking forward to this for the past four years now,” Velasquez said. “[It’s] definitely memorable.”

Jayme Ritchie, graduating from YSU with nursing, said she looked at a bunch of pictures on Pinterest for graduation cap ideas. She said she found the quote, “The best is yet to come,” which sums up how fast the past four years have gone by.

“Looking at it all, I feel like there’s so much more yet, even though the past four years have been a lot,” Ritchie said.

Ritchie said she enjoys being creative and plans to use colors that will match her outfit on her cap. She said she is also looking forward to looking at everyone’s caps on graduation day.

“It kind of says a little short story about the past four years of your degree,” Ritchie said. “It shows a little bit about who they are.”

Desiree Ridzon, who is graduating with early childhood education from YSU, said she wants to do something in memoriam of both her grandma and her fiancée’s grandma on her graduation cap. She said she’s still trying to work on it.

“It could be really important,” Ridzon said. “It depends on the graduate if they want to or not. Some don’t feel like it’s important, but some do.”

Stephen McDermott, who’s graduating with hospitality management from YSU, said he thinks seniors decorating their caps is important because it shows their beliefs and what their major means to them.

“It kind of also shows where they really would want to go with their career,” McDermott said.

McDermott said he would definitely put a pineapple on his graduation cap because the hospitality society is symbolized by the pineapple. He said they believe they all stand together, so maybe a hand and a pineapple mixed with a background will be on his cap.

“It shows who you are, who you went to school with and what you want to do with your life,” McDermott said.