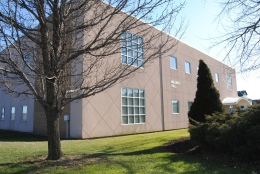 Melnick Hall could see $2.5 million in much needed renovation funding from the state of Ohio. Photo by Jordan D. Uhl/The Jambar.

“The entire second floor is going to need renovated top to bottom,” said Rich White, associate director of planning and construction at Youngstown State University. “The entire interior space is going to be gutted and redone to fit whatever departments go in there.”

White estimates that the total cost of the Melnick renovations will be $4.5 million, but the cost could be subsidized by the state.

As a result, YSU could see a nearly $10 million increase in the state’s next budget cycle.

An itemized breakdown shows which schools are receiving funds.

Melnick Hall will see $2.5 million for renovations, the largest single amount for YSU.

“We figure on using $2.5 million from state capital and the rest from philanthropy and gifts,” White said.

Roof repairs at Fedor Hall, Cushwa Hall and the Lincoln Building, and elevator repairs for Melnick Hall and Maag Library will receive $4 million.

“There’s always something to do roofwise on campus,” White said.

White said the exterior modifications are to repair cracks in masonry, windows and bricks.

The remaining $1.4 million will go toward renovating emergency generators, lighting in the campus core, storm water systems and the Edward J. Salata complex, which is the facilities building.

The University of Cincinnati received the largest single amount for a long-term renovation project: $28 million allocated for the Medical Sciences Building.

Greg Hand, director of public relations at UC, said he was pleased with the results of the plan.

“Ohio’s campuses have done a great deal to ensure that projects on the capital list are high-priority,” Hand said in an email. “In general, the projects are critical renovation projects to extend the effective life of academic buildings.”

In his State of the State address, Kasich foreshadowed this plan, which he felt would force universities to work together, rather than competitively, when vying for state resources.

“The state asked us to list what we feel are our needs for basic renovations and projects and add it to the capital request list,” White said. “They ended up picking the top four on the list, which wasn’t put in any order.”

There is a possibility YSU could see a reappropriations bill, with excess funding from the fiscal year 2012 budget being used for projects overlooked in the plan.

Regardless, White said he is happy with the potential funding and feels YSU got a fair share. Some weren’t completely satisfied.

“Most universities, all can use more money than what’s being allocated,” said Gene Grilli, vice president for finance and administration.

2 comments Anonymous Tue Feb 21 2012 23:43 that’s great…it’s called a warehouse. that type of use in a multi-million dollar building suitable for classrooms and offices is wasteful. Anonymous Tue Feb 21 2012 13:21 “…to fit whatever departments go in there.” That means that the Department of Theater and Dance won’t necessarily be invited back into Melnick after the renovation. If it is not, where are the hundreds of set pieces, props, miscellaneous items and overflow costumes going to be stored? And even if they are, where is the department to store all of this while the renovation is taking place? It may seem that this “equipment sits idly,” and you may be right that it does when not in use. However, those idle equipment pieces turn into brilliant beings full of life when on the stage, lit, and interacted with. It is necessary to have a large enough storage space where the items can be organized and categorized.