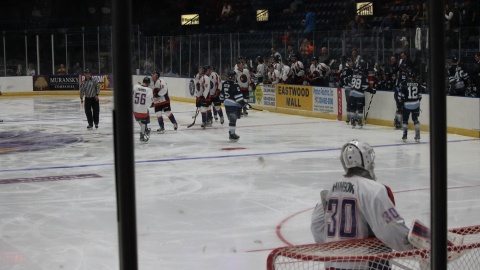 Katie Seminara, director of Game Day Operations and Community Relations, said the goal of the event was to encourage people to vote.

“While we provide a fun, family oriented atmosphere, the purpose of this theme is to remind the community of their civic duty,” Seminara said.

Supporters of Donald Trump and Hillary Clinton, the respective presidential nominees of the Republican and Democratic parties, came to the hockey game to discuss their preferred candidates and policies with attendees. Impersonators of the candidates dropped the puck to start the game.

The theme also included voting for a new name for the Phantoms mascot, which hasn’t been revealed yet. Participants could either choose a name or write in their own.

Seminara said voting for the new name on a night when people were discussing the presidential election made sense. She said they strive to come up with themes that are fun and current.

The YSU Student Government Association set up a table at the event and encouraged people to register to vote in the upcoming election. They educated people on the candidates and national issues.

James MacGregor, vice president of University Affairs, said SGA wants to be more active in the community, so participating in “mock election” night was a great way to achieve their goal of raising political awareness outside the campus while promoting Youngstown’s semi-professional hockey team

“We are also working with several groups on campus to promote a more politically active and politically aware campus,” he said.

MacGregor said the event was a good way to get YSU students involved in voter registration.

“It was absolutely a successful event. It was the last hoorah to promote voter registration before the deadline to register, and we are very happy with the turnout,” he said. “We will continue working for the cause, but we are now switching our focus to election awareness and illuminating the issues.”