The Youngstown State University Office of Housing and Residence Life has been working to address issues that arose last semester, such as overcapacity in the residence halls.

Twenty-four rooms were expanded between Lyden and Cafaro House last semester. In Lyden, some rooms that were previously double occupancy were expanded into triple occupancy rooms, according to a Jambar article published on Sept. 9.

Student residents on campus are beginning spring semester comfortably because rooms that were previously over capacity have been condensed.

According to Ian Tanner, associate director for residence life, more than 60 students chose to live in on-campus housing as of the spring 2018 semester.

The study lounge on the first floor of Cafaro House was temporarily closed for a few months during the fall 2017 semester due to the sudden increase in demand for housing.

Some residents expressed that they were inconvenienced and as a result, the study lounge reopened in the middle of the semester. 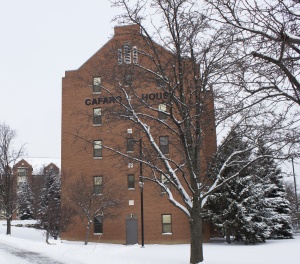 According to Tanner, some students in rooms that are over capacity have not requested condensed dorms because they have grown accustomed to the space.

Tanner said no one is on the waiting list and a portion of on-campus housing is still available this semester.

Billy Cook, a sophomore mechanical engineering major, has lived in Cafaro House since he came to YSU. Due to lack the of space, Cook said he was aware of people living in the study lounge for a few months last semester.

Demetrius Brown, a freshman, moved to Cafaro House this month. He said he has been using the study lounge to heat up food and watch games.

Brown said when he is tired of being in his dorm room, he likes to come to the study lounge and sometimes plays poker.

He said he did not talk to many people on campus prior to moving into the dorm, but the study lounge gives him the opportunity to socialize.

“It’s kind of fortunate to speak to people,” he said. “It’s helping my social skills, helping me talk to people more and not be shy.”

Devin Hale, a mechanical engineering major, has lived in Cafaro House since last semester and had three roommates.

Hale said midway through the fall, they moved another desk and chair into their room since there were just two desks for three people.

“It made it kind of possible for me to have a desktop,” he said. “It’s so much more comfortable.”

According to Tanner, the $200 security deposit will no longer be required in the fall 2018 semester, but a $35 application fee to request on-campus housing will be.

“Our goal is to hopefully makes the process a little smoother,” he said.

Tanner said a MicroFridge – a mini-fridge and microwave combination appliance – will be in each dorm room in the upcoming fall semester.