Campus just got sweeter. Hot Heads Burritos opened an ice cream stand in their facility called “Campus Cones” on Aug. 25. It’s the first of its kind on campus.

Campus Cones provides ice cream from Pierre’s Ice Cream Co. and is owned by Pam VonBergen, who owns Hot Heads, Subway and co-owns Pressed. It’s been a three-year process to get the ice cream stand installed. 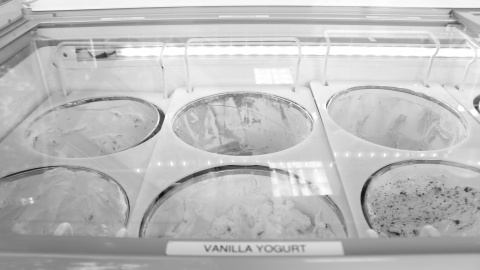 Larry VonBergen, her son, said they originally wanted to combine the burrito and ice cream businesses when Hot Heads opened eight years ago, but it wasn’t conceivable at the time.

“We kind of had it in the back of our heads … People always said there was nowhere to get dessert or ice cream on campus,” Larry VonBergen said.

Kayla Mehle, an employee, said there’s been a mixed reaction to the shop.

To promote the new ice cream shop, 1,000 free ice cream samples were given out the first week.

“Our numbers have been increasing, because we walked around the whole campus passing out coupons for the free ice cream,” Mehle said. “Since it’s hotter, more people have been coming in.”

Larry VonBergen said business has been a little slow so far, because the addition is new, and they haven’t done much advertising yet. However, people are taking notice of its presence.

Dan McCormick and Cory Pedalino are two customers who were excited about Campus Cones arrival.

“It’s a great thing, for a long time there was no place to get a proper ice cream cone,” McCormick said. “I intend to go there quite often. More than I should, actually.”

Pedalino said he tried the coffee flavor when they were giving out flyers with free sample coupons, and it is the same quality as Handel’s ice cream.

Having an ice cream shop in Hot Heads would be weird in a city setting, McCormick said, but on campus it’s understandable, because there is limited space. He is one customer that likes the combination of Mexican style food and dessert.

The plan is to keep both businesses in the facility for now, Larry VonBergen said.

“The building is big, it seats 99, and it’s never filled to capacity so we might just keep Campus Cones there,” he said.

It makes sense to keep the ice cream shop there, because business will fluctuate depending on the seasons and the school semesters, Larry VonBergen said. He worries people won’t want to buy ice cream once fall hits.

“It’s really hard on campus, because business fluctuates as the school semesters go in and out,” he said. “Campus business is quite different from a city business right by the mall where they have steady business all day. We just have rushes where we get crushed.”
Building awareness of the new shop, despite the construction happening on Lincoln Avenue in front of the building, is the next task they face, he said.