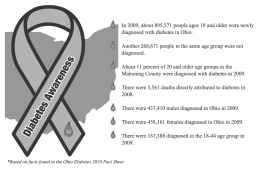 Edward Krol has seen diabetes at its worst.

“As a son who lost his mother in 2003 due to complication of diabetes, it has exposed me to firsthand knowledge of this disease,” Krol said.

Krol has been the on-campus director of resident dining since summer 2008. As an executive chef with more than 30 years of experience, he is required to take continuing education classes to keep his knowledge “current on nutrition, food allergies, food safety, as well as new information on medical trends in the population, such as people with diabetes, celiac disease, Crohn’s disease and many more.”

According to the 2011 National Diabetes Fact Sheet, about 8.3 percent of children and adults in the U.S. have diabetes. About 25.6 million people over 19 were diagnosed.

According to the American Diabetes Association website, diabetes is “characterized by high blood glucose levels that result from defects in the body’s ability to produce and/or use insulin.”

According to the American Diabetes Association, type 1 diabetes, formerly known as juvenile diabetes, is “usually diagnosed in children and young adults.” Type 1 is when the body doesn’t create enough insulin, which means the person must take daily insulin injections. The cause of type 1 is thought to be a combination of genetics and environmental factors, which are still unknown.

According to Web MD, gestational diabetes “is a condition characterized by high blood sugar that is first recognized during pregnancy.” Approximately 4 percent of pregnancies are found to have this condition.

Although one doesn’t need to follow a specific diet when he is diagnosed with diabetes, he should monitor what he is eating. Carbohydrates, fat and protein intake influences blood sugar levels and must be watched carefully.

Krol has many options for the students on campus. He said the options are there, but that students “have to take responsibility to make sure they are eating the right things.”

The National Library of Medicine states that carbohydrates have the most influence on blood sugar levels because the body takes the sugar from the carbohydrates and turns it into glucose. Insulin, a hormone produced by the pancreas, then takes the glucose and either uses it to fuel the cells in the body or stores it for future use.

If the body can’t create insulin, the glucose produced by the breaking down of these foods will not be used or stored properly, which causes build up in the bloodstream, which causes high blood sugar.

Krol provides not only food from local farms, but will also take the time to help students that may need a specific diet. Though people with diabetes don’t have to give up the foods they enjoy, they may want to keep track of what they are eating. Krol said he will help them do this.

“People with diabetes don’t have to be restricted to boring, bland foods,” he said. “Instead, they will need plenty of fruits, vegetables and whole grains — foods that are high in nutrition and low in fat and calories — and fewer animal products and sweets. In fact, it’s the best eating plan for anyone.”

Dining services has made it easier for students that may need to plan their meals because of diabetes. On the dining services website, there are many different ways to find out the nutrition values of the meals being offered. Each dining location also provides its nutritional information, or has a barcode that can be scanned so one can look at the information on a cell phone.

Krol also helps students get in contact with dietitians, who will work with the students to come up with a meal plan best suited for them. If there is something that they specifically need, Krol will try to incorporate it into the meals being offered.

Healthful food is not the only thing that will help someone with diabetes; insulin injections or oral medication are usually prescribed. Diabetes, if not monitored and cared for properly, can lead to other medical problems. For example, the 2011 National Diabetes fact sheet says that “diabetes is the leading cause of kidney failure, nontraumatic lower-limb amputations and new cases of blindness among adults in the United States.”

Krol said that while the rates of diabetes continue to rise, it is important to get the information out to the public. He continues to try to add more healthful options for people and publicize the information to students so they can make informed decisions.