With the election approaching, Laurencia Canzonetta has been attempting a task that might seem difficult — she’s trying to get college students to vote for Donald Trump. 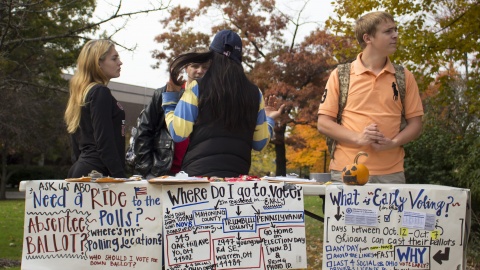 While acknowledging that most YSU students — and young people in general — are liberal, Canzonetta said people are underestimating the number of conservatives on YSU’s campus.

Polling shows that 60 percent of voters aged 18 to 29 have thrown their lot in with Hillary Clinton, but there are still 30 percent supporting Trump (the other 10 percent back third party candidates or are undecided). Their presence is visible on campus: supporters don pins and T-shirts, and several cars in campus parking lots are adorned with Trump stickers.

The Youngstown State University College Conservatives, the group Canzonetta leads, has grown from three members when she reactivated it earlier this semester to over 50 now.

“Trump just lit a fire in that he wasn’t a politician,” Ashley Kirila, secretary of the College Conservatives, said. “He wasn’t corrupted. He was all for us and bringing back jobs.”

People are frustrated, Canzonetta said, and Trump has tapped into that. She said Trump speaks his mind, and that serves as an antidote to a rising tide of political correctness that some might feel stifled by.

“He’s speaking up against the corruption,” she said. “Not just [with] the opposing candidate, but on the party ticket that he’s running. I think that’s something that’s really resonating with people.”

As a woman in college, she recognizes that she isn’t the typical Trump supporter, but she said he’s someone who has created jobs and wealth; he can take those same principles and apply them to the American economy.

Canzonetta doesn’t agree with the things he’s said on the leaked Access Hollywood tape in which Trump bragged about kissing women without their consent, but she said actions speak louder than words. When Trump Tower was being constructed, the foreman was a woman.

“Yes, the words that were said were disgusting,” Canzonetta said. “But he apologized. I accept his apology, and I think this election is a lot bigger than some words said 11 years ago.”

Kirila said that while she agrees with Trump on border security, the way he spoke about Mexicans early on in his campaign was troublesome. She said he’s gotten better about expressing his views as the campaign has progressed, and after supporting Ben Carson in the primary, she’s backing Trump in the general election.

She also has concerns about the Access Hollywood tape, but those concerns aren’t great enough to risk a Clinton presidency.

“I did not appreciate the things that he said,” Kirila said. “But I would rather have him in there than Hillary.”

The Other Side of the Aisle

Meanwhile, Dylan Edwards, president of the YSU College Democrats, has been trying to get college students excited about voting for Hillary Clinton.

Getting involved in politics isn’t a recent development for Edwards. When he was nine, he wanted to volunteer for Secretary of State John Kerry’s presidential run, and he’s been involved to some degree in just about every election since. His support of Clinton stretches back to her ’08 run.

Getting students on board has become an easier task lately. Before the debates, Clinton was polling anywhere from 15 to 30 points behind where Barack Obama was in 2012 with young people. She’s caught up since then, and now she commands about 60 percent of the millennial vote.

Edwards said there’s still some work to be done to heal the divide revealed by Sen. Bernie Sanders in the primary, who rallied young people around issues like student debt and the financial crisis.

“You have young people departing from the more centrist Democratic mold and moving towards the left,” Edwards said. “And when you have Clinton, a candidate who seems to be more like the center that they’ve been trying to shy away from, the connection’s not there.”

Jacob Schriner-Briggs, the College Democrats’ press secretary, has made that connection. He supported Sanders in the primary — he said the Senator’s progressive views are more in line with his own — but he’s come around to Clinton.

“I get why people are stubborn about it and frustrated about it,” he said. “But the choice I have to make is a choice between two candidates, and it’s not even close for me.”

Edwards was with Clinton from the beginning, a position he credits to his background as a political science major. Having studied the inner-workings of congress — and having observed them as an intern for U.S. Sen. Sherrod Brown over the summer — Edwards said he didn’t think Sanders would be able to follow through on his promises.

He understands why concerns about Clinton’s trustworthiness might give people pause, but he also said anyone involved in politics is going to accumulate baggage. Hillary may have more than most, but he said that’s because she’s been in politics for 30 years.

Schriner-Briggs said he has some concerns — he’s found some of the reports on the Clinton Foundation disconcerting — but he doesn’t think those concerns are unique to the Democratic candidate.

“If you dug deep enough [into any candidate] you could find some of these relationships that give people pause,” he said. “I just think maybe with Hillary Clinton — because of her longevity in the public sphere and because she’s a woman — those things are working against her extra hard.”

The conservatives also have their own challenges in connecting with college students. Namely, that young people tend to vote for Democrats.

For Canzonetta, being conservative is in part about respecting a strong work ethic. She was brought up to believe that hard work is the key to success, and she said that’s reflected in the Republican Party. She said some young people get blinded by social issues and neglect to consider the economy.

“It’s one thing to be passionate about one social issue,” she said. “But you gotta look towards your future.”

She mentioned things like premium increases under the Affordable Care Act and the trillions of dollars added to the national debt.

“This is what a young America will be saddled with,” she said. “They’re going to carry this.”

Kirila has liberal friends, and there are a lot of things they disagree on. But she said they share her concern about being able to find employment opportunities when they graduate. She said Trump would lower the corporate tax rate and bring back jobs that have been outsourced.

James Mullarkey, vice president of the College Conservatives, said limited government and lower taxation are basic elements of conservatism that aim to restore power to the people.

“We want economic prosperity for all, not just the few,” Mullarkey said. “We’re not encouraging governmental exploitation and subjugation like the Democrats and their big government policies that encourage a welfare state.”

Mullarkey supported New Jersey Gov. Chris Christie in the primary, and he acknowledged that Donald Trump is not always a conservative in the traditional sense. But Christie’s practical approach to governing a blue-collar state appealed to Mullarkey, and he said Donald Trump shares that with Christie, which could be a benefit.

“I would say that he’s a pragmatist,” Mullarkey said. “There’s a lot of appeal for crossover Democrats on the left, or your disgruntled Republican that’s been very dissatisfied with the establishment in Washington over the last 20-25 years.”

Getting Out to Vote

Given that young people tend to vote for Democrats, the divisions in the Democratic Party could depress turnout among young voters. This is a perennial concern. In 2012, 18 to 29 year olds were the least likely to vote among all demographics.

Edwards said the lack of engagement is bothersome because millennials recently surpassed the baby boomers to become the largest age-group voting bloc in the country.

“[It] gives us a great deal of power to actually influence who our leaders are, who our president will be, the policies and direction of our country,” he said. “But we don’t take it.”

Getting out to vote is one area where the leaders of both the YSU College Democrats and College Conservatives can find some common ground. Canzonetta said her group has talked to a lot of people who struggle to find a connection with either candidate.

“A lot of people are just like, ‘Oh well, I’m not voting. Who cares?’” she said. “It’s hard to explain to them that it’s an amazing right to have because a lot of people around the world don’t have it.”

She also stressed that young people are allowing older generations to dictate polices that will shape their lives for years to come.

Both groups have been doing the same kinds of things to increase involvement: registering voters, canvassing and phone banking.

Mullarkey said the response has been enthusiastic. Edwards said older students have felt pestered by voter registration efforts, but younger students are excited to vote in their first presidential election.

Schriner-Briggs said whatever students can do to engage in the democratic process and help elect leaders who share their views is important.

“If you’re not voting because you’re apathetic, I would always strongly encourage you to start looking to get involved and to start reading up on candidates and issues.”

Cat Cooper, vice president of the Latino Organization at YSU, supported Bernie Sanders in the primary, and she’s supporting Hillary Clinton in the general election even though she doesn’t agree with all her policies.

“I will not vote for someone who disregards the Hispanic or Latino community,” Cooper said. “You’re offending the whole Hispanic community [when you make comments like Trump has].”

“It doesn’t matter what political party you associate with,” she said. “At the end of the day, you have to remember that we’re all human beings, and we’re all Americans.”

She said a lot of Hispanic students feel similarly about Trump’s treatment of Hispanics, while noting that there are also some Latino students who support Trump.

Grant Fleegle, a political science student, said this year’s election is ridiculous, with two of the most corrupt people in America running for president.

“We have one candidate with no political background, many failed businesses and many of his policy positions do not really exist,” Fleegle said. “The other is a corrupt warmonger … Neither of these two people deserve to be president. They will both not represent America well.”

He’s supporting Jill Stein in the election, he said her policies align with Sanders’, who he supported in the primary.

While many have tried to argue that third-party votes are inconsequential, Fleegle said he doesn’t think he’s throwing his vote away.

“I educated myself on every candidate running for president this year, and I’m voting for who deserves to run this country, not for who is telling me they should,” he said. “The lesser of two evils will never go away if we keep putting them into power.”

Greta Frost is a political science student and vice president of the College Democrats. She said she’s excited to see what happens in Ohio.

“We’re not too far out from the election,” she said. “And we really have no idea which way [Ohio]’s going to go.”

Clinton has enjoyed a substantial lead in national polls since the debates, but that has started to contract over the last week. Canzonetta said she still thinks her candidate has a shot.

“They think Hillary has it by a landslide,” Canzonetta said. “I think they might be surprised on Nov. 8. At least I hope so.”