The Butler Art Museum presented Slow Art Day on April 8, a day internationally observed. The theory behind Slow Art Day is for people to visit their local museums and galleries to appreciate the artwork.

Ciaran Malys, a docent at the Butler Institute of American Art, feels it is important for people to really focus on the art they are looking at. 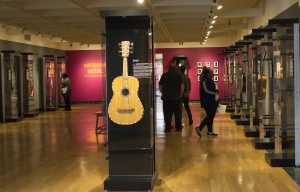 “During Slow Art Day, we want to take 10 or 15 minutes to look at a work of art,” Malys said. “People should look at the painting and not just get the history of the artists, but try to understand the artwork itself.”

Taking a tour of a museum tends to require people to stay in a group with their guide; the guide is there to answer questions about the artwork. When people are on a tour, they don’t have much time to wander and explore art on their own.

“Here at the Butler we’re evolving and trying to engage everyone that comes in,” Malys said. “We want people to be able to find out how the painting captures their attention and what mood it sets for them.”

For Slow Art Day, the Butler Museum hand selected and featured six works of art in a mini tour from 12-3 p.m. The artworks featured were “Ship Starlight” by Fitz H. Lane, “Snap the Whip” by Winslow Homer, “In Flander’s Field” by Robert Vonnoh, “The Little Dancer” by Robert Henri, “Lincoln the Railsplitter” by Norman Rockwell and “Americans: Youngstown People” by Alfred Leslie.

“I think it’s all about the presentation, to have the docent walk with you to explain further some of the details you don’t pick up as a common person,” said Youngstown local Cheryl Emrich.

Patrons were gradually coming into the museum, at first one at a time, and then couples as well as parents accompanied by their children to take part in Slow Art Day.

“It really gives you some time to look at the pieces a little more closely, especially when you’re able to explore the museum on your own,” said local Linda Hahn. “It’s also a good excuse to come down and check out the museum.”

The works of art that really seemed to spike the most interest was the guitar exhibit on the second floor, as well as the series of Impressionist paintings in the Watson Gallery.

“One artwork I really liked was the one I saw of Lincoln by Norman Rockwell,” said local Rose Wilkens. “When I lived over in Illinois we went down to his house in Springfield which was definitely something worth seeing as well.”

According to one of the docents, the painting “Lincoln the Railsplitter” is estimated to be worth at least $3 million and is on loan to the Butler by an esteemed patron of the museum.

“I came today because there was an article in the paper that my friends had seen, and they didn’t want to come by themselves,” Wilkens said. “I like art, so I just decided to tag along with them. I really enjoyed it too.”