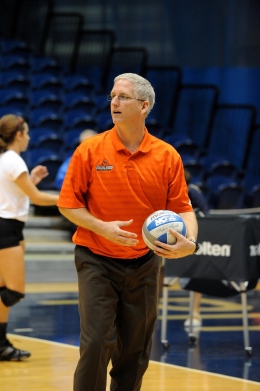 Hardaway comes to YSU after being on the bench as an assistant for Bowling Green State University from 1992 to 1993 and from 2004 to 2011. He was a head coach in between, with stops at Western Kentucky University and the University of Evansville.

Hardaway said it was the love for YSU and from the people he met that sold him.

“Athletics today has become such a business that some people forget they are dealing with student-athletes,” he said. “I knew with the people here there was a definite love and concern for this university.”

Hardaway takes over for Krista Burrows who complied a 7-51 record in her two seasons at the helm.

Sophomore outside hitter Missy Hundelt was surprised to hear of Burrows’ departure, but she is also excited.

“I thought she was going to stay at least another year,” Hundelt said. “The change is good. She left the team in a good position to win.”

Hardaway said he is aware of the cards he’s been dealt.

“Well, I know it has been 12 years since they have had a winning season, so I have to get in and evaluate the program,” he said. “I am not really sure of the current roster other than what I have seen on paper and on YouTube clips.”

Hardaway said he will use a quick style of offense with the Penguins.

“It comes down to the current players wanting to sacrifice to win,” he said. “Hard work doesn’t guarantee wins, and they have to buy into what we want to do.”

Hardaway added that he knows the Horizon League is tough, but that he would make sure the team is ready.

“We know we have to be able to compete in the league and ultimately to make the tournament. It’s a matter of if we can catch them,” Hardaway said.

Hardaway said he would waste no time in getting started, even though the season doesn’t begin until September.

“Tuesday, I will be on campus to start evaluating the team, and we are set for a workout,” he said. “It’s going to be a challenging task, but I think we will be up for it.”

Hardaway helped BGSU to a 206-122 record as an assistant. He went 45-27 at WKU in two seasons before heading to Evansville for eight seasons.

In 1998, Hardaway coached Evansville to its first winning season in 10 years. His team set school records in 2000 for most Missouri Valley Conference wins with 10 and the highest conference finish (fifth) in school history.