Andy Feil, a Youngstown State University electrical engineering major, is a student athlete of a different nature. When he isn’t hitting the books, he’s living life a quarter mile at a time on the sprint car racetracks.

One typical Friday, Feil headed home to New Castle, PA for a race. It was the normal routine. Until the unordinary occurred. 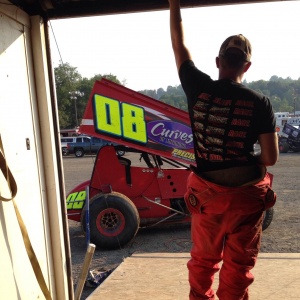 During a routine heat race going about 85 mph, a wheel malfunction caused Andy to lose all control. His car flipped several times before finally coming to a rest.

“I didn’t really even have time to think; I saw the wheel shoot off,” Andy Feil said. “That was my last thought.”

Doug Feil, Andy’s father, recalls initially being calm at the sight of the incident, considering he has watched crashes happen a thousand times.

“Nobody had known he was hurt that bad at the time but when we saw the knucklehead stand up we figured everything was fine,” Doug Feil said. “Loading the car up on the truck, I was approached by someone that informed me that Andy had been life flighted to Pittsburgh. That’s when it really hit me how bad it was.”

Andy Feil’s body was completely numb; during the crash, he broke his neck. He had no recollection of what happened, so when he woke up in a hospital bed in Pittsburgh, he was shocked and confused.

“There were doctors running around taking samples, asking questions, like who I am, what happened and then I remember they all disappeared,” he said.

Andy used a cell phone provided by a nurse to call his family and fell asleep. When he woke, his mom, dad and girlfriend were at his bedside. The first words out of his mouth were, “How’s the car looking?”

While the sight of Andy calmed his family, they were all still concerned about what sort of battle he would be facing in the months to come due to his injuries. He had ligament damage in his neck and a bad concussion. Luckily, the doctors found no signs of nerve damage.

Time and healing in a neck brace would be all Andy needed to make full recovery and get back to the classroom.  He attempted to attend classes two weeks after the incident.

Unfortunately, two weeks of homework and complications with his healing process caused him to have to make a decision.

“Sitting through class became painful, paying attention with a neck brace meant turning my whole body every time the teacher moved,” Andy Feil said. “After a few days [back], I realized I needed to take the semester off.”

Andy returned to his studies at YSU the spring semester of 2015. Against the doctor and his father’s wishes he returned to the races, concluding this comeback season with a near first place finish.

Racing is only an option for Andy while he attends YSU, where he is currently a junior. Once his education is complete, he will be leaving the race track and taking on a full time job.

“Once I graduate, that’s when life begins,” Feil said. “That’s when it’s time to get a real job and racing for me won’t be an option anymore.”

Before doing so, Andy will be able to get one last taste of sprint car racing come April.