The Garrett O. Hansen Hale exhibit in the Biss Hall Judith Rae Solomon Gallery shines a light on how guns are viewed in America and around the world.

Hansen said people all over the world are debating gun laws and everyone is yelling at each other with no resolution. He hopes his art will engage people on the issue of guns.

“I hope my art causes engagement and dialogue instead of shouting,” Hansen said.

Hansen’s work is described as art with bullet holes. The goal of his work was to open people’s eyes to America’s gun issues.

“We only talk about gun culture in response to tragedy,” Hansen said. 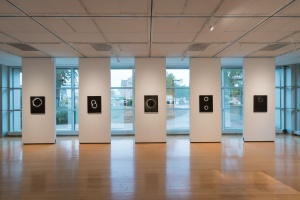 Hansen wants to show his work in as many places as possible. He has done shows all over the world, including Texas and Japan.

“Every location I show my work the conversation is different,” Hansen said.

Hansen said having his art at Youngstown State University gives the YSU community a chance to think about gun issues and gives Hansen a chance to get feedback from students and teachers.

Stephen Chalmers, associate professor of photography, invited Hansen to YSU after hearing him speak at the Society for Photographic Education Midwest Conference in Louisville, Kentucky about his work.

Chalmers was intrigued by Hansen’s work.

“Then, like now, our culture was overrun by firearms. I asked him if he wanted to exhibit here and he said yes,” Chalmers said.

Chalmers thinks students should see the exhibit because it’s another way to think about photography.

“One thing I like about the exhibit is it shows an expanded form of what photography can be opposed to traditional lens based representations of the world,” Chalmers said.

Chalmers said one piece of art, a mirror with bullet holes in it, was designed so when walking into the gallery the bullet holes would match up with a person’s torso and head.

Chalmers enjoys the exhibit because he can go there to think.

“I like the exhibit because it’s aesthetic and beautiful. The images themselves are beautiful until you think about what they represent. I find it impactful and when I go into the space I have a quiet meditative experience about the role of guns in our culture,” Chalmers said.

“I think what he’s trying to bring to the forefront of people’s consciousness is that guns aren’t the bad thing, it’s our rules and regulations surrounding them,” Colon said.

Kade Meredith, a criminal justice major, said the project is outside of the box.

“I would never think to take pictures of the bullet holes and put them into a message,” Meredith said.

“The art is bullet holes. As the light hits it, it reflects on the wall. It’s very unique and different from different artists,” Miranda said.

Hansen did this project because when he moved to Kentucky from Indonesia he was struck by the gun culture in America.

“It was something that’s a big and problematic part of American culture and something I wanted to investigate more deeply,” Hansen said.

The gallery is open until Friday.